Declining Natural Capital: High Stakes for Asia and the Pacific 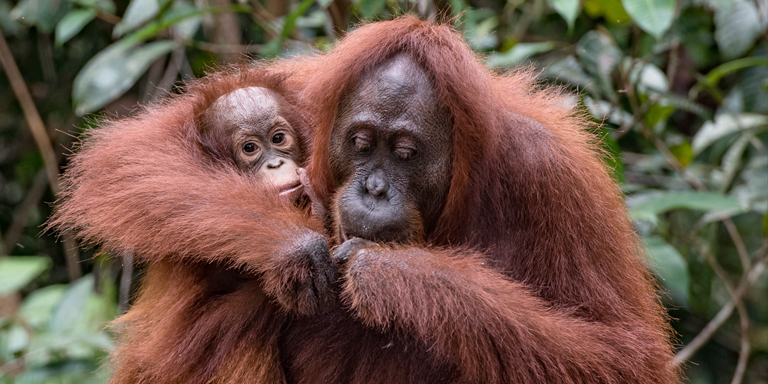 Overexploitation of invaluable ecosystems in Asia and the Pacific has resulted in serious environmental degradation and biodiversity loss. Photo credit: F. Ricciardi/IG: @fransaround.
Share on:

The widespread loss of natural ecosystems and biodiversity is much more than a conservation issue; countless lives and livelihoods depend on them.

Asia and the Pacific is one of the most biologically and culturally diverse regions on the planet that hosts high numbers of unique animal and plant species and ecosystems. Seventeen of the planet’s 36 biodiversity hotspots are found here, along with three quarters of all coral reefs and more than half of all remaining mangrove areas on earth. It is also home to almost 60 per cent (4.5 billion) of the current global human population, 52 per cent (400 million) of the 767 million global poor, and as much as 75 per cent of the global population of 370 million indigenous people.

The people and economies of the region rely heavily on this wealth of natural capital and the vital ecosystem services it provides. More so the rural poor, who directly depend on natural capital for their livelihoods and ability to cope with climate change.

While unprecedented economic growth over the last decades has reduced poverty and increased quality of life for many, it has come at an enormous cost. Rapid urbanization and infrastructure expansion, excessive water extraction and land conversion for agriculture and industry, unsustainable aquaculture, and fossil fuel use for energy and transport have, among other human activities, degraded the region’s natural capital and increased global greenhouse gas emissions resulting in changes in climate. This in turn has led to the further deterioration of land, soils, freshwater and marine ecosystems thereby increasing water and food insecurity and climate vulnerability, creating a vicious cycle.

The depletion and ultimate loss of natural capital can have far-reaching consequences to human health and well-being and pose fundamental threats to human security. It is therefore critical for countries in Asia and the Pacific to restore, protect, and sustainably manage their remaining natural capital stocks.

The Current State of Natural Capital in Asia and the Pacific

Results from a landmark study by the Intergovernmental Science-Policy Platform on Biodiversity and Ecosystem Services (IPBES) released March 2018 show that the region’s natural capital is in dangerous decline.

Overexploitation of the region's forests, grassland, oceans, coasts, freshwater, and other ecosystems to meet increasing demand for food, energy, housing, and commodities such as palm oil, pulp, rubber, and timber has resulted in deforestation, land degradation, desertification, and biodiversity loss. The massive regional trade in wildlife and wildlife products for food, traditional medicines, ornaments and pets is leading to loss of species. Household hazardous waste, e-waste, and food waste are increasing and plastic waste and marine pollution is of urgent concern.

Natural capital provides people with indispensable goods and “ecosystem services” that include: 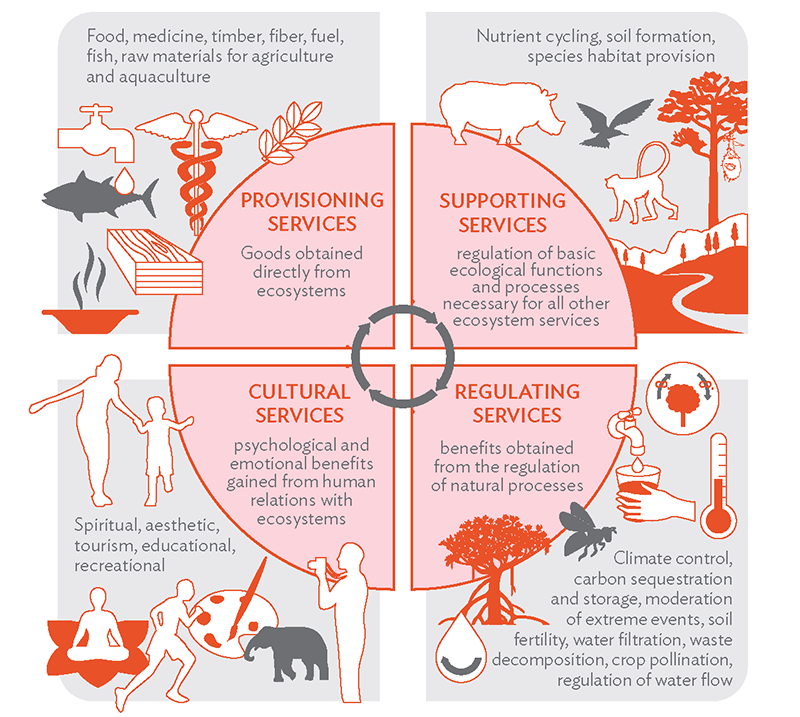 Degraded ecosystems lose their inherent ability to provide these goods and services. Deforestation, for example, compromises freshwater, food, energy, and medicines. It also increases the risks of disease and pest outbreaks to crops, animals, and humans as well as drought, deadly flash floods, and landslides with large damages to infrastructure like dams and roads.

Natural capital is inherently scarce and its loss often irreversible 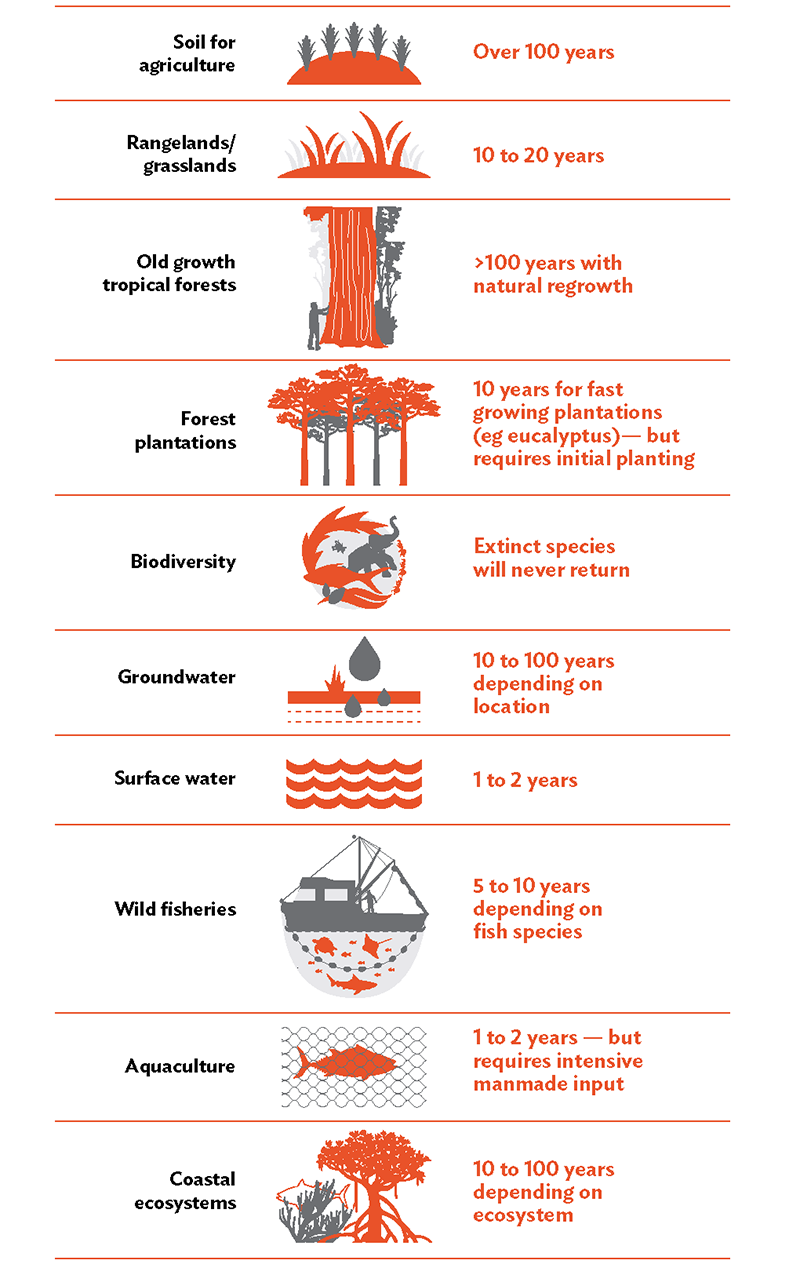 Natural capital is fundamental to the region’s economies

On average, 30% of national wealth (GDP, exports, and government revenues) in Asia and the Pacific comes from natural capital. Dependence varies widely, from as high as 85% in Bhutan to 39% in Viet Nam and 19% in the Philippines.

A 2016 study valued ecosystem services for terrestrial ecosystems in 47 countries in Asia and the Pacific at $US14 trillion/yr in benefits, most of which are non‐marketed and do not show up in GDP.

Bhutan’s ecosystem services have been valued at $15.5 billion/year significantly greater than GDP of $3.5 billion a year. Ninety per cent of the population is dependent on agriculture and forestry while 72.5% of the country is covered by forests that provide the rural poor with fodder, fuel wood and building materials.

In the Greater Mekong Subregion (GMS), natural capital accounts for 20%–55% of the total wealth of countries and has been a key contributor to the region’s rapid economic growth over the last 30 years. Agriculture (including forestry) is the subregion’s main source of employment. The Mekong River supports the world’s largest inland fishery, with annual turnover of up to $3.9 billion. Natural capital also sustains the manufacturing and service sectors, including Viet Nam’s thriving furniture industry, as well as tourism for the GMS and the entire Asia-Pacific region.

The poor directly depend on natural capital

Nearly three quarters of the world’s poorest citizens are directly dependent on natural capital: 50 per cent are smallholder farmers, 20 per cent are rural labourers, and 10 per cent depend on herding, fishing and forestry. Land, water, marine,and soil degradation, consequently reduce fishing and agricultural yields, drastically lowering the earning capacity of groups.

Nearly 200 million people directly depend on the forest for their non-timber forest products, medicine, food and fuel, as well as other subsistence needs.

90% of fisheries jobs across the region are small-scale, with millions of people working across the value chains.

The “GDP of the poor,” an indicator of household income in rural and natural asset–dependent communities, illustrates the significant dependence of rural poor on natural capital. In Indonesia, while agriculture, forestry, and fisheries have an aggregate value of 11% of GDP, but for poor households (99 million in total), this increases to 75%. In India it as much as 53%.

The region’s urban poor are also particularly vulnerable to the negative impacts of degraded natural capital in cities. Living in densely populated slums with no access to safe water and sanitation, exposed to air and water pollution, and often surrounded by hazardous wastes, they constantly face and suffer from health risks. As well, they are the most affected by climate impacts such as urban heat and flooding.

People in the region are heavily dependent on fisheries for food, with aquaculture growing by nearly 7 per cent annually. More than 120 million people in the Coral Triangle alone depend directly on marine and coastal resources for their food security and livelihoods.

Of the total population of 333 million people in the Greater Mekong Subregion (GMS), more than 60 million (mostly rural poor) depend directly on natural capital for their daily energy, food, water, and income needs. Fisheries provide 47%–80% of animal protein consumed in the GMS, and more than 80% of Cambodian and Lao PDR households depend on biomass for cooking and lighting.

Seven main rivers including the Brahmaputra and the Ganges are fed by the Eastern Himalayas and provide freshwater for more than a billion people in the region. According to the Asia Water Development Outlook, a key dimension of water security is how well a country can manage its river basins and sustain ecosystem services. Rivers in the Pacific islands still show good river health and advanced economies are doing well due to strong governance. Declining river health is most evident in Bangladesh, the lower Yangtze River Basin of the PRC, Nepal, and Mekong Delta in Viet Nam.

Healthy ecosystems are vital to climate and disaster resilience

Coral reefs and mangroves forests in coastal areas have similar value for buffering storm surges and tsunamis by reducing wave heights and energy, while forests reduce landslides near roads and dams.

Their destruction and degradation can exacerbate climate impacts and place populations at risk.

Depleted natural capital can give rise to conflict, displacement, and forced migration

Declining natural capital often lies at the root of displacement, conflict, and forced migration all over the globe. Entire populations have needed to uproot from lands and areas they rely on for survival and sustenance. Up to 135 million people are at risk of distressed migration as a result of land degradation in the next 30 years.

In the PRC, increasing desertification threatens nearly 400 million people living on the nation’s agricultural periphery. Communities of displaced “ecological migrants” have sprung up in Xinjiang, Tibet, and Inner Mongolia. A substantial portion of those directly threatened by encroaching deserts are ethnic minorities, exacerbating concerns about increased ethnic tensions in peripheral regions.

ADB. 2015  Investing in Natural Capital for a Sustainable Future in the Greater Mekong Subregion

ADB-WWF. 2012.  Ecological Footprint and Investment in Natural Capital in Asia and the Pacific. Manila.

Development Asia. 2018. How to Promote Investments in Natural Capital in the Greater Mekong Subregion.

The Economics of Ecosystems and Biodiversity (TEEB). 2011. Mainstreaming the Economics of Nature: A Synthesis of the Approach, Conclusions and Recommendations of TEEB.

FAO. 2006. Assessing the Access to forest resources for improving livelihoods in West and Central Asia countries. 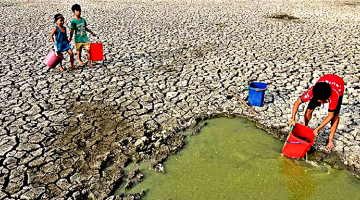 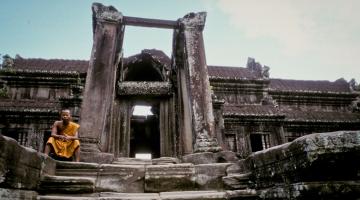 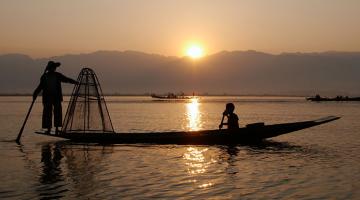