Why the Demand for Cash Is Growing 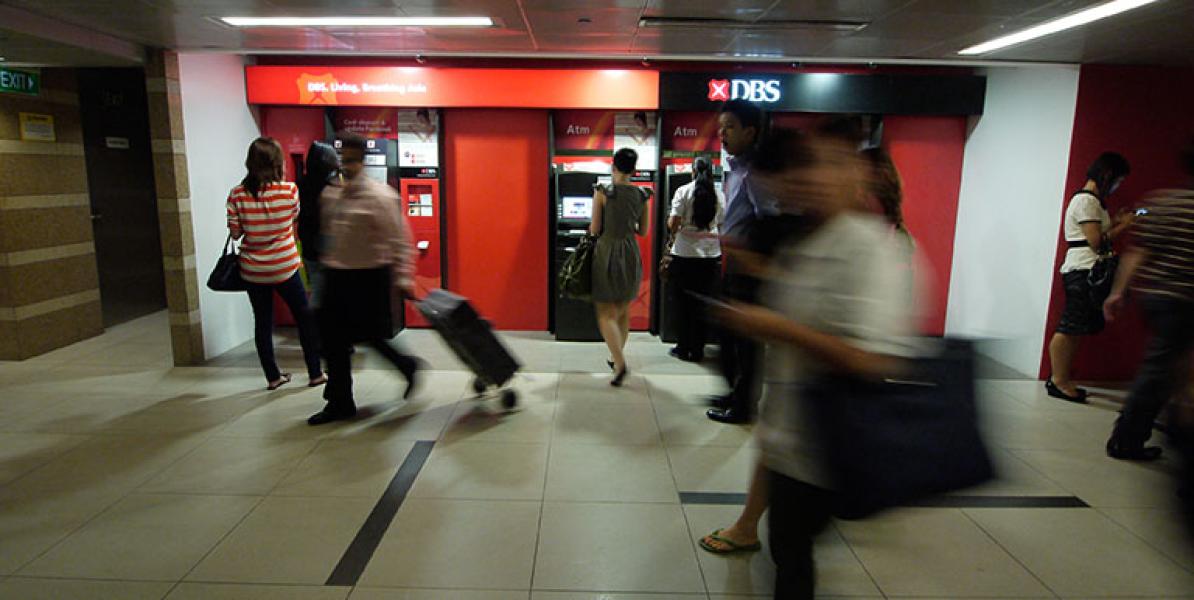 The study looked at cash in circulation as a percentage of nominal GDP to trace the factors behind the increased demand for cash. Photo credit: ADB.

Bucking the digital trend, the appetite for cash is driven by such factors as opportunity cost, precautionary motives, aging, and demand from abroad.

In recent years, cashless payment methods have become increasingly prevalent around the world due to the use of various innovative tools and convenient financial services through mobile phones. This trend is contributing to greater efficiency in our economies and financial systems. Nevertheless, a puzzling phenomenon is that the demand for cash has been rising in many countries. This means that growth in the demand for cash reflects factors other than the transaction motive used for payment. These factors might include opportunity cost, precautionary motives, and other motives such as aging and demand from abroad.

In a recently published Asian Development Bank Institute study (Shirai and Sugandi 2019), we investigated movements in cash demand by focusing on 11 advanced economies and 11 emerging economies for the period 2000–2018. The value of notes in circulation can be regarded as reflecting cash demand since a central bank normally determines the amount of cash to be issued passively by responding to changes in the demand for cash. The amount of cash in circulation is, thus, beyond the control of a central bank. A central bank issues and circulates cash through the banking system by providing commercial banks with the cash demanded by withdrawing the equivalent amount from their reserve balances with the central bank; these commercial banks then distribute the acquired cash to the public on demand through windows of bank branches and/or automated teller machines (ATMs). Among the factors contributing to cash demand, the transaction motive is generally proxied by nominal gross domestic product (GDP). Therefore, we focus on cash in circulation as a percentage of nominal GDP to trace the movements in cash demand driven by factors other than transaction demand.

Figure 1: Cash in Circulation as a Percentage of Nominal GDP (%) 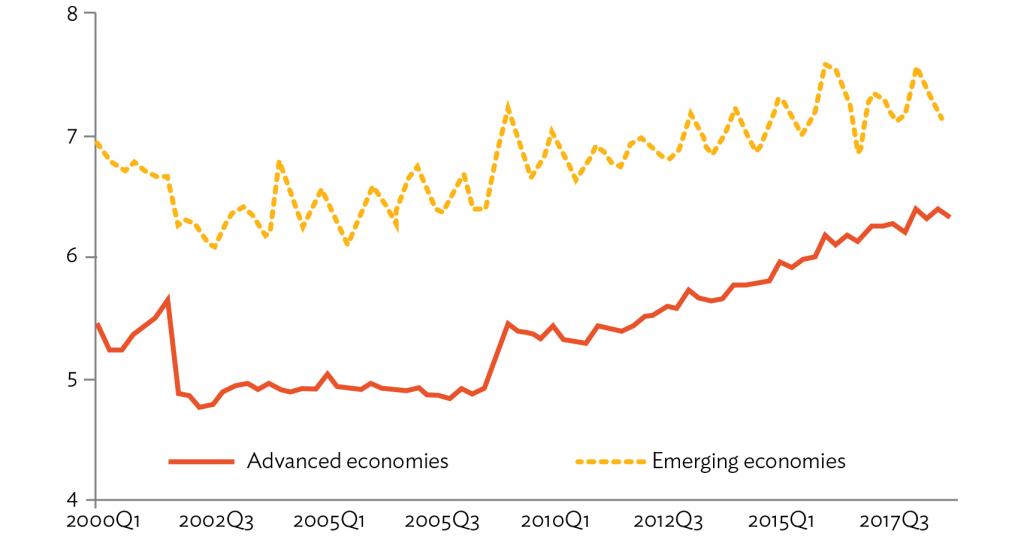 Source: Prepared by the authors based on data from CEIC.

Among the advanced economies, there were economies with a rising trend (the eurozone, Japan, Republic of Korea, Singapore, the United Kingdom, and the United States), economies with a mostly stable or constant trend (Australia and Canada), and economies with a declining trend (Demark, Norway, and Sweden). For the economies with a rising trend, the rate of increase accelerated especially as economic uncertainty rose as a result of the global financial crisis of 2008–2009. It is noted that Japan’s cash-nominal GDP ratio has always exceeded other economies by a wide margin and has even increased to around 20% recently, further widening the gap. Japan’s high cash demand may reflect cultural habits, such as high levels of public trust in the stable government and legal tender in the face of persistently low inflation. In addition, a series of monetary easing measures conducted by the Bank of Japan has reduced interest rates and lowered the opportunity cost of holding cash.

In the case of the United States, the cash-nominal GDP ratio continued to rise even after the Federal Reserve increased the federal funds rate 9 times during 2015–2018 in the process of monetary policy normalization. In sharp contrast, Sweden exhibited a completely different pattern by becoming the most-advanced cashless society globally. Sweden’s declining cash-nominal GDP ratio, even after a negative interest rate policy was adopted since 2015, indicates that the negative interest rate policy did not promote substitution from bank deposits to cash.

As for the emerging economies, the economies with a rising trend included Mexico, the Philippines, Poland, and Thailand—which all grew from the early 2000s. Meanwhile, the economies with a declining ratio included the People’s Republic of China from the early 2000s and Turkey since 2017. In particular, the secular declining trend in the cash-nominal GDP ratio in the People’s Republic of China may reflect a shift in the form of money held by the public from cash to bank deposits and other cashless payment tools (such as Alipay or WeChat Pay). This is in line with a deepening of the banking system and an increase in the number of depositors with commercial banks. Meanwhile, India’s cash–GDP ratio remained stable until 2016, suggesting that India’s cash growth was associated more or less in line with transaction demand growth. A sharp drop in the ratio in India happened temporarily in 2016 after the government abruptly implemented a currency reform that triggered a temporary shortage of banknotes in circulation.

The former group may indicate the presence of high and rising demand for cash hoarding since high-denomination banknotes are best suited for this purpose. In particular, the outstanding issuance amount of the largest ¥10,000 note in Japan was consistently the largest over the observation period, while the pace of issuance increased further since 2013 when the Bank of Japan adopted massive monetary easing. Meanwhile, some studies report that a rapid rise in the outstanding issuance amount of the $100 note in the United States since the global financial crisis might be attributable partially to foreign demand from emerging economies, which regard the US dollar as a safe haven currency (Haasl, Schulhofer-Wohl, and Paulson 2018; Judson 2017).

As for the second group, the outstanding amount issued over medium-denomination banknotes has dominated that of other higher-denomination and lower-denomination banknotes. This is because the public use cash only for lower-value transactions and use credit cards or other cashless payment tools for higher-value transactions. In the case of the eurozone, the outstanding amount issued on the €500 note was never large, despite the adoption of various unconventional monetary easing tools. This could be related to the fact that the residents of the eurozone maintained smaller-denomination banknotes for daily transactions and did not increase their precautionary demand for cash. The limited use of the €500 note indicates that the adverse impact of the European Central Bank’s decision in 2016 to stop printing the €500 note from the end of April 2019 had a limited impact on the economy.

Finally, our empirical analysis using pooled data for the 22 economies found that the low interest rate environment generated by massive monetary easing, as well as age-related factors, contributed to increasing demand for cash. Regarding aging, cash is prevalent in economies with a large population of older persons compared with economies with a small population of seniors due to the demographic’s habits and affinity for using cash. Some older persons also stop using credit cards after retirement.

As a future topic, it will be interesting to examine whether the demand for cash will decline if stable crypto assets such as Facebook’s Libra—which can stabilize its value against a basket of reputable fiat currencies, such as the US dollar—become widely used in the world.

T. Haasl, S. Schulhofer-Wohl, and A. Paulson. 2018. Understanding the Demand for Currency at Home and Abroad. Chicago Fed Letter. No. 396. January. Federal Reserve Bank of Chicago. 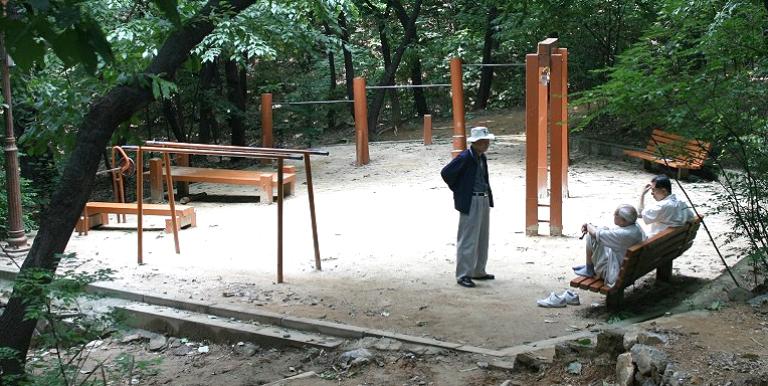 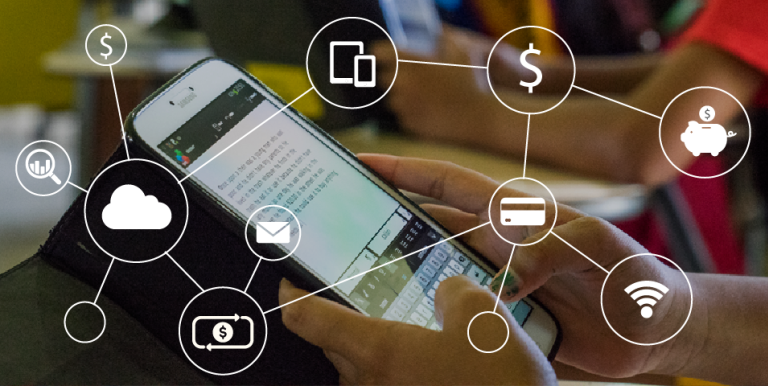 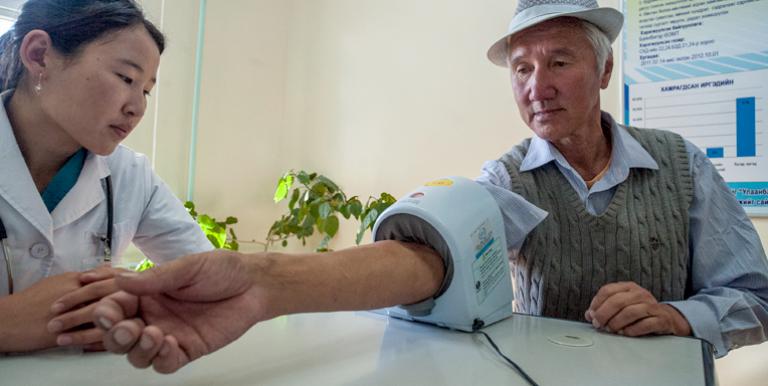