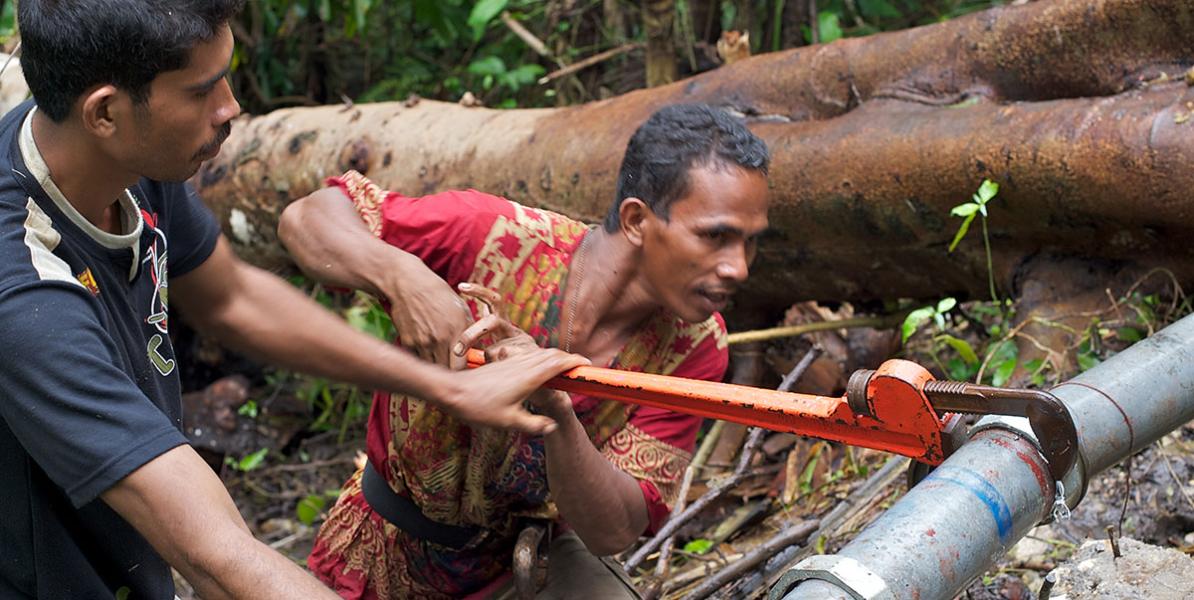 Technicians from the project areas were trained to repair and maintain the water supply systems. Photo credit: Basil Rolandsen.

In Indonesia, the rural poor gave cash and in-kind contributions to improve and maintain water supply and services.

Indonesia launched the Rural Water Supply and Sanitation (RWSS) project "ProAir" in 2002 with the support of the Federal Republic of Germany (GIZ and KfW) to provide clean water and sanitation facilities in the province of East Nusa Tenggara.

ProAir used a community-based approach, which has helped to achieve more sustainable results than a process-oriented project. It promoted behavioral change to a healthier way of living and trained communities to take over the technical maintenance of the facilities and administration (including payment collection).

This article summarizes the ProAir handbook, which explains step by step how rural water supply systems can be sustainably implemented and managed. It explains the benefits of in-kind and in-cash contributions as well as regular payments for water consumption. It also provides a project timeline to support the planning of community-based systems. Though ProAir also worked in the sanitation sector, the handbook focuses more on water supply.

Experience shows that rural water supply systems often do not last long. The main reasons for this are the lack of ownership, funds, knowledge, tools, and institutionalization. The approach used by ProAir addresses all of these five factors:

To strengthen ownership among users of the water supply and sanitation systems, ProAir was implemented with the philosophy that, wherever and whenever possible, beneficiaries should participate in planning, implementation, monitoring, and maintenance.

ProAir prioritized processes over results. It addressed one of the basic principles of the building process: to establish a sense of ownership among participating stakeholders.

ProAir conducted a campaign to introduce the program, where project staff (government and consultant) explained the steps of implementation and the requirements of collaboration to beneficiaries at the district, village, and hamlet level. This intensive socialization process was essential for transparency and for the creation of trust.

As an example, ProAir demanded a written proposal for a water/sanitation project be sent to the ProAir office. Each proposal had to explain the basic principles (including a sketch) of the system and had to be signed by at least 70% of the beneficiaries. Further all beneficiary groups had to collect an in-cash contribution. Groups of beneficiaries who did not fulfil these requirements did not reach the next step of implementation, which means ProAir did not commence the detailed planning of the system.

The local beneficiaries were obliged to provide in-cash and in-kind contributions.

The in-cash contributions were up-front payments paid per individual. The amount was 20,000 to 30.000 rupiah per person, which is about $1.20 to $1.80 at current exchange rates. The money was not used as a contribution for the construction; the water user groups stored the collected amount in their bank accounts. The money was considered as start-up payment for maintenance and management.

The in-kind contribution varied per system and demand. In general, the local beneficiaries provided local materials, such as stones and sand as well as labor. In some cases, the contractors paid food for work.

ProAir trained the local beneficiaries in all aspects needed. The group members were trained in administrative and financial management, they received capacity training in group regulations, dynamics, and management as well as on how to repair the installed systems.

ProAir provided all water user groups with a toolbox that all technicians could use to maintain and repair their system from the very first day.

The ProAir project worked in one of the poorest and driest areas of Indonesia (NTT). Before the water supply systems were built, the task of getting water for the household and schools fell upon the women and children. Some had to walk 10 kilometers in blazing heat.

Most of the systems built by the project between 2002 and 2011 are still in operation today.  Besides others, the project built the largest community-based water supply system with 15,000 users in Kodi Utara, Sumba Barat Daya. After project closing, the beneficiaries enlarged the system to seven more villages. Today, the system supplies 30.000 people in 13 villages; management is still 100% by the local people.

An important aspect for the sustainability of this multi-village system is that Proair built a water filling station for trucks and several hundred house connections. This has brought enough revenues for the maintenance of the system.

The handbook explains all steps needed for a successful implementation of a rural water supply project. It answers how much time is needed and how to start a project. A project always begins with an intensive community preparation approach. The water users play a key role in the success and sustainability of the project.

The technical design and the construction start only after the beneficiaries have shown proof (e.g., written proposal, collection of in-cash) that they are ready. During the construction, it is essential to use materials that are suitable to environmental and social conditions. Savings from low-cost investments might quickly end up in a waste of investments. The water systems built by ProAir were relatively costly; for instance, some systems used stainless steel.

The post-construction phase should not be underestimated either. This covers the period when beneficiaries make their first water collection near their houses and problems with broken taps and pipes may arise. Resolving post-construction issues is important for sustainability. In the first months of use, people need support and quick response so that they do not lose their trust in the system. A loss of trust might make them fall back into old behaviors. At this point, women played a significant role in ensuring sustainability. In the project area, they are traditionally responsible for satisfying the water demand of the household. The men do not seem to care much that the women had to carry the water for quite a distance. After ProAir built the water supply systems, the women pushed their men to take care of the systems. They said: “We do not want to tow water from afar again.”

Mr. Kanaf has worked for local and international NGOs in East Nusa Tenggara Province, Indonesia since 1988 in the areas of water, entrepreneurship, and accounting. He implemented programs in collaboration with/funded by Misereor Germany, CCF/Child Fund, CRS-USCC, Handicap International/Humanity Inclusion, GTZ/GIZ, AusAid, and Caritas Nederland. He was appointed as district coordinator of ProAir/RWSS Program, GIZ/AHT program in ProAir/RWSS in East Nusa Tenggara Province. His educational background is in information systems.

Mr. Moto has worked since 1980 in Indonesia in water, entrepreneurship, cooperative, accounting, and capacity building to sustain peace and integration in conflict prone areas. He has worked with CARE International, AusAid, and GIZ. He was senior program assistant of CARITAS Switzerland and project officer of Save the Children of UK and UNHABITAT/European Union Commission Program. He was co-team leader for social components, training and monitoring coordinator, and district coordinator of ProAir/RWSS Program.  He has a Bachelor of Law degree.

Between 2006 and 2011, Mr. Unger was the Senior Advisor of the TZ (GIZ) component of the community-based rural water supply project ProAir in East Nusa Tenggara, Indonesia. He is currently chief technical advisor of KfW for the community-based Forest Programme III in Sulawesi, Indonesia. He holds a Master of Science degree in Geography, Sociology, and Environmental Economy and he is a trained intercultural mediator. 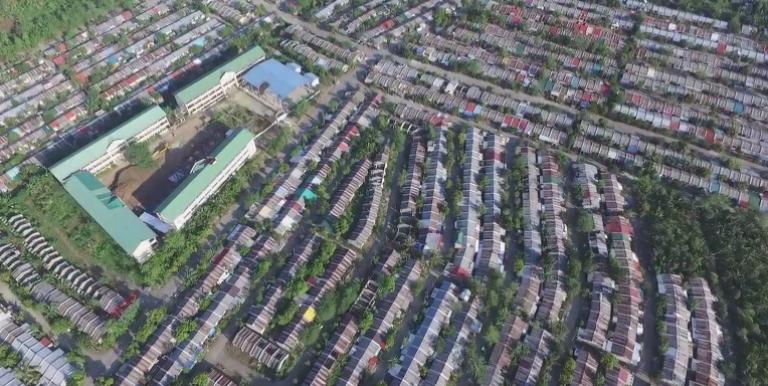 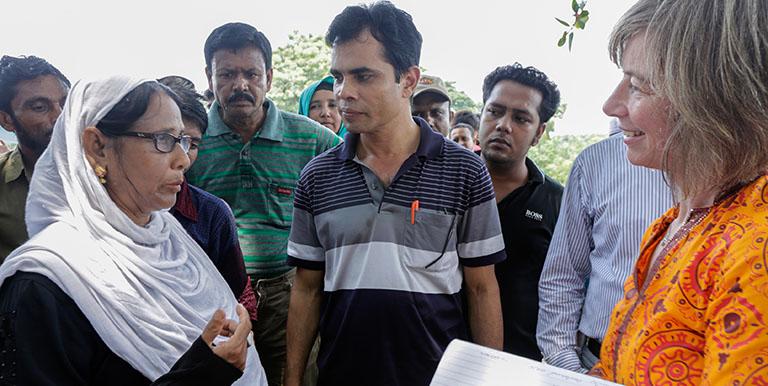 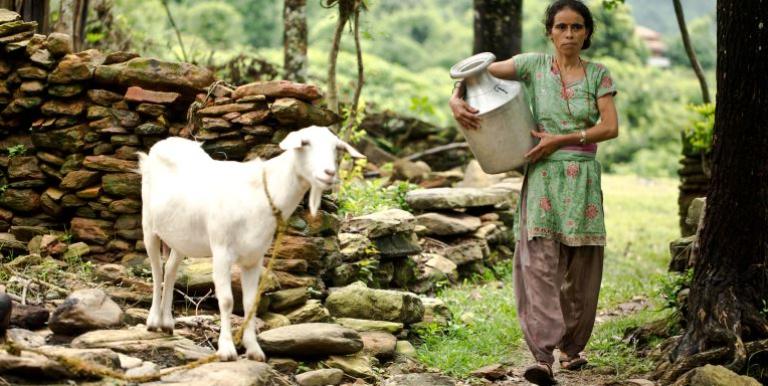