How an Efficient Port Impacts the National Economy 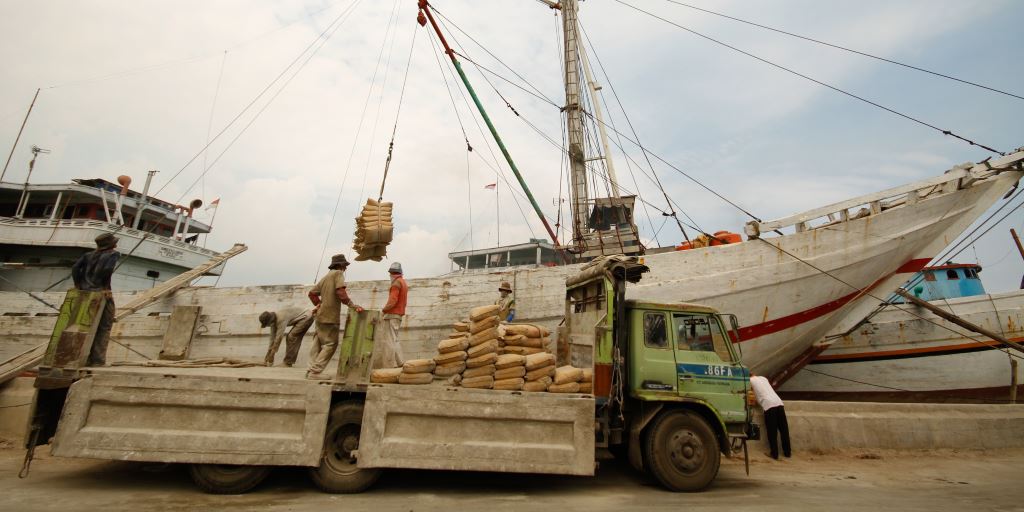 A study shows reducing clearance times at Indonesia's Tanjung Priok port in addition to expanding the port will contribute about 1.1% to gross domestic product.

Indonesia's growth has long been constrained by sluggish infrastructure development. An often-cited example of this is Tanjung Priok port, which serves more than two-thirds of the country's international trade.

The port was developed over 100 years ago and has since undergone only a few minor extensions. It is now struggling to deal with rising container traffic, while container dwell time has increased consistently since 2010, reaching 8 days in 2014, which is triple the dwell time of the most efficient port in Southeast Asia. This situation has added significant costs and delays to both importers and exporters. Contrary to popular perception, the hard infrastructure of Tanjung Priok is not the largest contributor to increased dwell time. The main cause of the increased dwell time is the port's soft infrastructure.

This paper has two objectives: first, to examine the causes of the increased dwell time and identify solutions, and second, to analyze economy-wide benefits of improved efficiency in Tanjung Priok using IndoTERM, a bottom-up and dynamic computable general equilibrium model for the Indonesian economy.

The findings of the analysis suggest that a 50% improvement in Tanjung Priok's efficiency over the next 5 years will generate additional national growth of about 1.1%. Jakarta and its surroundings will benefit the most from this improvement, while other regions trading with Jakarta will also benefit.

While Tanjung Priok is Indonesia's most efficient port, its productivity is much lower than that of major ports in Southeast Asia. Container dwell time in Tanjung Priok reached 7 days in August 2013, compared with only 4.9 days in 2010. While dwell time started to decline moderately in 2015, it is still three times higher than Singapore and almost double that of Tanjung Lepas in Malaysia (Figure 1).

The prolonged dwell time at Tanjung Priok has a number of adverse effects. First, the delays increase costs for domestic businesses and ultimately the prices paid by consumers. Second, bottlenecks at the port reduce the competitiveness of export-oriented industries. Although dwell time for exports is slightly lower than for imports, it directly increases logistics costs for exports. A significant portion of inputs for the country's manufactured exports are imported, so delays lead to higher costs for manufacturers. Long dwell time also reduces Indonesia's ability to benefit from declining international shipping costs and hence hampers the country's integration into efficient worldwide supply chains.

Contrary to popular perception, the hard infrastructure of Tanjung Priok is not the largest contributor to increased dwell time. While the rapidly growing amount of container traffic has generated congestion at certain times, a deeper examination suggests that the port's soft infrastructure is a bigger part of the problem.

The biggest cause of delays is the upstream preclearance process, averaging about 4 days. The quality of port infrastructure does influence the speed of unloading the container, but the bulk of the upstream delay is because of administrative processes related to border control, quarantine, and various checking requirements.

The customs clearance average time is already competitive by international standards at around 1 day. The final step, removing a container from the port by truck, is still rather long and takes more than one day.

The quality of hard infrastructure contributes to the downstream delay because of congestion around the port, which partly explains the increased cost of transporting containers to manufacturing sites. The cost of delivering a container from Cikarang (the nearest industrial zone) in West Java to Tanjung Priok across a distance of 56 kilometers is $750, much higher than the cost ($450) across a similar distance in Malaysia (from Pasir Gudang to Tanjung Pelepas).

A lasting solution to Tanjung Priok's problems will require improvement of both hard and soft infrastructure. The government has started efforts on both fronts. An expansion project commenced in 2014 and is scheduled to be completed in 2018. Further investment is expected after 2018 to further expand Tanjung Priok's capacity. The government has also started to improve the port's soft infrastructure by introducing measures to reduce corruption. These include abolishing cash payments at container terminals and eliminating face-to-face interactions with Customs officials at the gate.

Some low-hanging reforms can also be implemented more quickly to reduce time wasted during the upstream processes.

First, the current dwell time for priority importers averages 4 days, but priority status is given to only a limited group of importers and accounts for only 16% of total containers handled at the port. The government can enlarge membership of the priority group by establishing clear, reasonable, and transparent criteria for importers to join.

Second, the government has established the Indonesia National Single Window (INSW), an integrated system for unifying data for export-import licensing, but its function could be improved. Ideally, INSW should allow users to submit the information required by several agencies in a single entry, with a single sign-on, including payments. Such a system will further reduce face-to-face and paper-based transactions.

Fourth, allowing a more flexible and parallel process, where possible, instead of sequencing the steps, could potentially help to reduce preclearance times.

Dwell time should decline in coming years if the government implements the aforementioned measures. Increased efficiency of Tanjung Priok port will have widespread impacts on the economy. These impacts are analyzed below using IndoTERM, a computable general equilibrium (CGE) model for the Indonesian economy.

IndoTERM was used to analyze both the regional and economy-wide effects of improving efficiency at Tanjung Priok port. It was developed based on TERM (The Enormous Regional Model), an interregional model of the Australian economy (Horridge, Madden, and Wittwer 2003). It was created to deal with highly disaggregated subnational data, while providing quick simulations. (Download the original PDF version of this paper for more information on IndoTERM.)

IndoTERM analyzes policy change by using two simulations (Figure 2). The first is the baseline (business-as-usual) simulation, showing economic development in the absence of the policy under consideration. In generating the baseline, most macroeconomic variables were set exogenously to follow forecasts of the International Monetary Fund (IMF). The second simulation includes all the features of the baseline simulation and also a one-off policy shock.

For the purpose of illustration, the policy shock is introduced in 2014 in Figure 2. The new growth path would therefore diverge from the baseline, making it possible to evaluate the impact of the policy. Policy effects are reported as percent deviations endogenous variables from the baseline. This method is pioneered by Peter Dixon in MONASH model. An informative application of this method outside of Australia is presented in Dixon and Rimmer (2012) to analyze President Obama's national export initiative using USAGE, a dynamic economy-wide model for the United States.

In considering solutions to the long container dwell time at Tanjung Priok port, we ran two policy simulations. The first simulation (SIM1) analyzed the government's policy to increase the port's capacity by 2020. This will involve about a 20% increase in capital in Jakarta's transport services industry. We therefore introduced a policy shock in SIM1 to increase investment in Jakarta's transport services industry by 20% from 2016 to 2020.

The second simulation (SIM2) was to capture policy measures for improving soft infrastructure at Tanjung Priok to reduce port handling costs. We assume that these measures will gradually improve the port's efficiency by 50% from 2015 to 2020. This will lead to a reduction of international trade costs through FOB (free on board) prices for exports and CIF (cost, insurance, and freight) price for imports. The actual benefit will be divided between exporters and importers according to the degree of competition in international trade. For simplicity, it is assumed for this study that this benefit will be divided equally between exporters and importers.

Table 1: Impact of GDP at Regional and National Levels

The combined effect of the two policies is growth of around 4% in Jakarta's gross domestic product (GDP) from 2016 to 2030 (Table 1). It is interesting to note that the impact of SIM2 for Jakarta is almost four times that of SIM1. This is because SIM2 produces a direct and significant reduction of shipping costs, while SIM1 works through increased investment and its impact on shipping costs will not arrive until the port extension becomes operational. The combined impact of the two policies will account for around 1.1% of national GDP.

Figure 3: Most Benefited Industries in 2030 (% deviation from baseline)

The employment impact of the two simulations will be more jobs in manufacturing industries. Most of the jobs generated are in the Jakarta area, consistent with region-specific policy shocks introduced to the model.

Improved efficiency in Tanjung Priok will be positive for some regions in eastern Indonesia, which depend more on Jakarta for their goods and inputs. The impact on provinces competing with Jakarta in international ports will be negative. Increased efficiency in the port sector in Jakarta will have a slight negative impact on Sumatra, reflecting its declining relative competitiveness.

The study has two important findings. First, Tanjung Priok's declining efficiency is mainly because of soft infrastructure, rather than its hard infrastructure. This implies that a large efficiency gain can be achieved by implementing quick reforms. These include measures to transparently increase the number of importers with priority status, enhance the existing INSW, and introduce an integrated physical inspection facility.

The study also found that efforts to improve efficiency in Tanjung Priok, through port expansion and policy measures to reduce dwell time, will have a significant economy-wide impact. By 2020, these efforts will contribute around 4% to GDP in Jakarta and 1.1% of GDP nationally, supported by improved growth of manufacturing sectors currently constrained by Tanjung Priok's inefficiencies.

It is noteworthy that policy measures to reduce the upstream part of the dwell time will produce significantly bigger gains than capital investment to expand the capacity of the port. While this finding provides positive reassurance to accelerate the implementation of these measures, in practice, the two will need to go together to provide a sustainable and lasting solution to the port's problems. 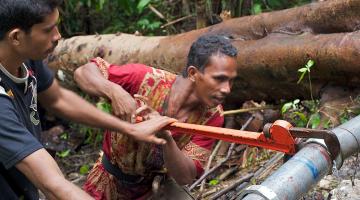 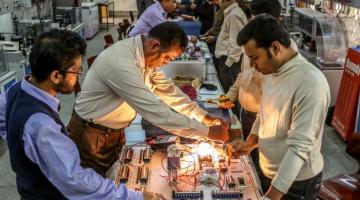