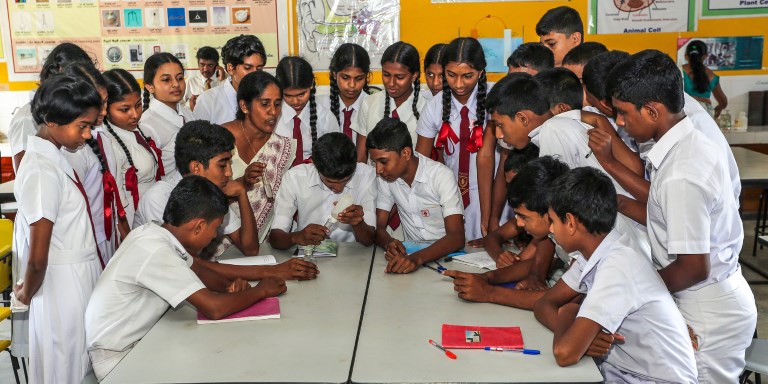 Improvements to Sri Lanka’s education system are having far-reaching impacts on the country’s economy. Photo credit: ADB.
Share on:

Sri Lanka is transforming its education system to take its economy to the next level.

From the Ground Up

After a series of vast transformations over the last 5 decades, Sri Lanka, in partnership with ADB, is attempting another bold transition.

In a laboratory at a secondary school on the outskirts of Sri Lanka’s capital city of Colombo, an experiment is taking place.

An instructor is inserting plant tissue into a microbe-free environment. Student Rashmi Koushalya observes nearby, hoping she can one day break into the male-dominated field of science.

"My ambition is to be a nanotechnology scientist, or to work in the weather department," she says.

Her small experiment in the classroom is part of a much more ambitious experiment taking place nationwide in Sri Lanka. The country is trying to transform its education system to produce graduates who have high-end science and technology skills and are sought after by employers.

"As a nation, we are trying to switch from being a labor market to a knowledge economy," says Ranjith Kumarasiri, an education specialist with Sri Lanka’s Ministry of Education.

Female students, who traditionally do not pursue science and technology studies in Sri Lanka, are a major target of the effort.

Underpinning this effort is another ambitious experiment supported by ADB. The Education Sector Development Program, which is financing Sri Lanka’s effort to expand science and technology teaching in schools, is ADB’s first-ever results-based loan.

This innovative loan disburses funding once clearly defined indicators—such as number of improved schools and trained teachers—are met. This helps ensure that students, teachers, and school systems receive the maximum benefit from the loan. Targets set for 2013–2016 have largely been met, and the program is ongoing.

Since 1966, when Sri Lanka joined ADB as a founding member, the country has made impressive progress in economic development and has markedly improved its social indicators. In the 1960s, the country was mostly rural, and had high rates of poverty, and low rates of education and literacy.

Sri Lanka’s rich cultural heritage and increasingly sophisticated workforce have positioned the country to benefit from strong economic growth. In practical terms, this has meant that many Sri Lankans are able to earn more and invest in their families and communities.

The country’s transport system and other infrastructure are being upgraded to move goods and people more efficiently, and to accommodate the increasing number of international tourists.

At 98%, Sri Lanka has one of the highest rates of primary school students moving into secondary school. In 2015, the adult literacy rate was 93% and almost 99% of people in the urban areas had access to safe water.

Improving lives, one project at a time

Over 50 years, ADB has helped upgrade infrastructure, improve education and skills based training, and assisted with post-conflict reconstruction. It has also supported the growth of small and medium-sized enterprises, the development of agriculture and natural resources, and the management of the public sector. This work has come in the form of nearly 200 projects and programs and other investments totaling more than $7.5 billion.

One of the earliest efforts by ADB in Sri Lanka was a project to help transform the country’s famous and economically vital tea industry. The Tea Factory Modernization Project, approved in 1968, cut the cost of producing tea, improved the quality of the product, increased government revenues from the industry, and helped 128 small business owners.

From those beginnings, ADB’s work spread across the economy and increasingly moved into agriculture, which had a direct impact on reducing poverty, enhancing the role of women, and protecting the environment. In the 2000s, ADB worked with Sri Lanka to assist areas in the north and east that had been affected by 3 decades of conflict, and was instrumental in bringing critical assistance after the 2004 tsunami that heavily damaged two-thirds of the country’s coastline.

Today, in line with the country’s evolving needs and the priorities of the Government of Sri Lanka, ADB’s work focuses on helping the country achieve inclusive growth, good governance, and private sector development.

The results of ADB’s work can be seen in Sri Lanka’s northern and eastern provinces. Economic activity in these once conflict‑affected areas has been increasing rapidly, growing at twice the rate of other provinces.

This is due in part to the two phases of the North East Community Restoration and Development Project, which has helped build and rehabilitate basic infrastructure and services needed for a fresh start. The project has restored crucial irrigation pumps, built a new dam, and refurbished agrarian outreach centers to supply farmers with essentials such as seeds and fertilizer.

The projects brought health services, education facilities, shelter, water, sanitation, and electricity to tens of thousands of people in conflict-affected areas. The reconstruction work provided much-needed employment for many residents.

In the hard-hit district of Mullaitivu, the ADB-supported Conflict-Affected Region Emergency Project is helping to improve roads and providing access to a reliable power supply. It has also restored irrigation systems so that farmers who return to work the land can earn more.

Tharmalingam Vasanthiradevi, a 64-year-old widow who farms 3 acres of rice paddies, can remember when artillery shells would land on her property. Fighting that raged around her farm, and sometimes spilled onto the farm itself, forced her to flee with her family in 2008.

Amid the chaos, the family abandoned their farm and their belongings, leaving with nothing more than they could carry. After 2 years, when it was safe to return to the farm, the family had lost nearly everything and had to start from scratch. The government assisted the family with fertilizer and farming equipment to begin planting again.

To support farmers in the area, ADB financed the improvement of an irrigation canal. The canal that was previously leaky and unreliable was lined with concrete and now allowed water from a nearby reservoir to flow easily and reliably to farms.

"We can get water more easily now and cultivate more,” says Vasanthiradevi. “It is still difficult to farm due to droughts and flood, but the irrigation canal has made work easier."

Education and Skills for Inclusive Growth and Green Jobs in Asia: Sri Lanka

Development Asia Insight: If Poverty Is the Problem, Remittances Are a Solution

Development Asia Case Study: How to Get Private Financing for Port Projects 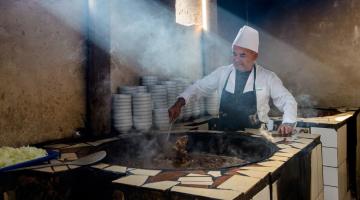 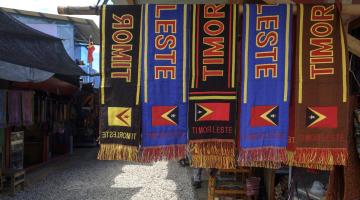 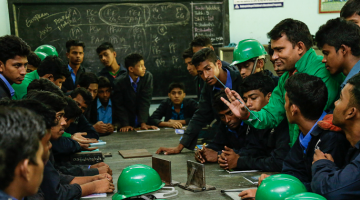