How to Get Private Financing for Port Projects

Through a public-private partnership project, Sri Lanka's Colombo Port increased capacity and efficiency to receive larger ships and strengthen its position as a transshipment hub in South Asia. Photo credit: ADB.
Share on:

Using a landlord port model is one of the effective ways to promote private sector participation in port development and operations.

Colombo Port was suffering from market losses because it lacked capacity and efficiency. Upgrades were necessary to maintain its position as a transshipment hub in South Asia.

In 2007, the Asian Development Bank (ADB) approved the Colombo Port Expansion Project to upgrade the Port of Colombo through a public–private partnership using the landlord port model. The government implemented the dredging and breakwater construction, which could accommodate three new container terminals. The first terminal was implemented by the private sector through a build-operate-transfer contract.

The project increased port capacity and enhanced efficiency, thereby enabling it to accommodate the new generation of mega shipping vessels.

As one of the largest port sector investments in Sri Lanka, the project not only cements the country’s position as an important international trade gateway in South Asia, but it has become a successful model of public–private partnership in the region’s port sector.

The Port of Colombo is Sri Lanka's largest and busiest port. In 2005, container traffic volume at Jaya Container Terminal at Colombo Port accounted for more than 90% of Sri Lanka Port Authority’s revenues. About 70% of the containers handled at the port were transshipment containers, of which 75% were for the Indian subcontinent market and 25% for the West African market.

Colombo Port was the natural transshipment hub for South Asia. Between 1998 and 2002, however, the port’s share in transshipment of cargoes from the Indian subcontinent declined from 52% to 45% of the total even as the market grew at an annual rate of 8%. The loss in market share reflected a stagnation of overall container traffic volume at Colombo Port during this period. This occurred mainly because the fundamentals of the market changed and the port did not adapt. It could not offer the additional operating capacity needed to compete for the Indian subcontinent market or the depth required to berth the latest generation of container ships.

The ships started to turn to alternative ports, such as Nhava Sheva in India. Previously serving only smaller feeder vessels, Nhava Sheva port stepped up by improving efficiency and constructing a private terminal in 1999. Salalah Port in Oman and Port Klang and Tanjung Pelepas in Malaysia had also emerged to take a piece of Colombo’s transshipment traffic. Stringent pricing by Sri Lanka Ports Authority also turned away many shipping lines, while the Port of Singapore and Port Klang offered more competitive prices. Low productivity also contributed to Colombo Port’s decline.

In 2001, port efficiency at the main Jaya Terminal improved with the start of operations and increased competition from privately owned South Asia Gateway Terminal. However, the lack of capacity and low efficiency still constrained Colombo Port from sustaining its position as the transshipment port of choice, despite its strategic geographical advantage.

In 2007, ADB approved a loan for the Colombo Port Expansion Project to upgrade the port through public-private partnership. This approach not only brought about significant efficiencies in delivery, but it was also able to bring in tremendous financial leverage. The public sector investment of more than $400 million (including $300 million of ADB loan) brought in $500 million of private sector investment for the development of the first container terminal.

The project structure was successful in leveraging significant private sector financing to develop new terminals at the port. During project preparation, the initial cost of the South Container Terminal was estimated at $301 million. However, at its completion, the concessionaire is estimated to have invested approximately $500 million for the construction of the terminal. The increase in cost is likely because of the increase in cost of inputs and delivering on an expedited schedule. The terminal was completed 32 months ahead of original schedule. The first phase began operations on 5 August 2013, initially delivering 0.8 million twenty-foot equivalent units (TEU) per annum. It became fully operational by April 2014, adding capacity of 1.6 million TEU per annum.

The harbor infrastructure works was packaged as a single contract, which attracted good quality and experienced contractors. The upgraded port has a depth of 18 meters and has a two-way harbor access channel of about 9,000 meters long, 570 meters wide, and 20 meters deep. The port is equipped with a new navigation control tower facility, marine navigation aids, and vessel traffic management system. Some 6.4 kilometers of access roads were also constructed.

The project reclaimed 7 hectares of land from the sea by dredging 15 million cubic meters of sand from the main channel. About 5 million cubic meters of rock material was used for the 6.4-kilometer-long breakwater, which has 34,500 core-locs and a 9- to 11-meter high wave wall to protect the port from erosion brought by strong waves and adverse weather conditions. The project was designed to accommodate three new terminals, each with additional capacity of 2.4 million TEUs, thereby increasing the overall container handling capacity by 7.2 million TEUs.

However, the lack of dredging equipment and unfavorable sea conditions during the monsoon period caused some delay during project implementation. Close monitoring and review by engineers from both Sri Lanka Ports Authority and the contractor prompted adjustments to the work planning and program to make up for the delays as much as possible. The contractor overcame multiple difficulties and successfully completed the majority of works within schedule. The contract was extended by 6 months to complete minor building works. Overall, project implementation of the public sector component was considered successful. The actual construction period was about 4 and a half years, which is merely half a year more than estimated during appraisal.

For the Government of Sri Lanka, an efficient port system is key to improving the country’s competitiveness and attracting investments. The upgraded Colombo port is expected to not only bring more foreign exchange earnings and boost the tourism industry, but also facilitate the development of industries, such as ship chandlery, ship repair, and bunkering activities. It will also boost the textile industry, which accounted for about 40% of exports in 2012.

In 2006, Colombo Port’s total container handling capacity was estimated at 3.3 million TEU. With the opening of the South Container Terminal, the port’s capacity increased to 8.1 million TEU in 2015 and is expected to reach 10.5 million TEU when the other terminals become operational.

The South Container Terminal started operations in 2013. During its first year of operations in 2013, the terminal received its largest vessel at 14,000 TEU. It was a positive indication that Colombo Port was still being considered as an important transshipment hub in South Asia. With the port’s enhanced capacity, freight rates could be reduced to make the port more competitive and attract more ships. Moreover, the port is able to accommodate the new 18,000-TEU container ships, which could potentially bring even greater logistical efficiencies and cost savings.

Colombo’s efficiency levels are among the highest in the region. Some 70% of the cargo that passes through Colombo Port is for transshipment. Export shipments include tea and garments.  Imports are mainly large appliances, consumer electronics, and vehicles. Both top importers, such as supermarket chain owner the Cargills Group, and exporters, such as tea giant Dilmah, rely on the port’s efficiency.

In its first year of operations in 2014, the South Container Terminal’s total throughput was 686,636 TEU. As the demand for relay transshipment increases, the terminal offers a strategic link between the Indian subcontinent and the lucrative Asia–Europe shipping route. Its new facilities make it one of the very few ports in South Asia with a deep-water terminal that can accommodate the world’s largest container ships, providing greater cost efficiencies to mainline shippers.

Higher efficiency and faster delivery times will attract larger vessels and higher volume of trade. This would enhance Sri Lanka’s competitiveness in international trade and will draw investment in the country for manufacturing and distribution centers.

Determining the optimal balance of public and private sector participation was a crucial part of project structuring and preparation. The government applied a public-private partnership landlord port model, where the public sector would deliver the basic breakwater infrastructure and the private sector would deliver two of three container terminal facilities to be accommodated by the new breakwater. This approach brought significant efficiencies in project delivery and has resulted in tremendous financial leverage.

Given the project’s large scale and complex nature, it was important to bring in quality consultants and contractors. Continuation of services from the main design consultants to provide construction supervision not only reduced the time for procurement but also resulted in minimizing liability risks and disclaimers of responsibility. Realization of the full project benefits was contingent upon the public and private sector components being well-coordinated and implemented as planned.

Sustaining an environment of healthy competition and private investor confidence

Continued and nurtured partnership with the private sector would allow for sustained and efficient port operations. Sri Lanka Ports Authority has been advised to continue implementing and monitoring the environmental management plan, which covers the operation of the South Container Terminal. The Ministry of Ports, Shipping, and Aviation has also been advised to continue the functions of the Advisory Committee to redress port operators' grievances relating to unfair competition. 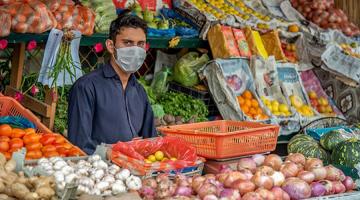 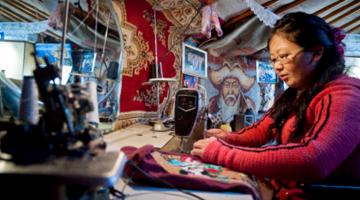 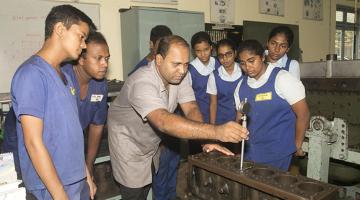 How Technology is Creating Future Leaders and Entrepreneurs