Transforming a Business District into Walkable Space with Private Financing 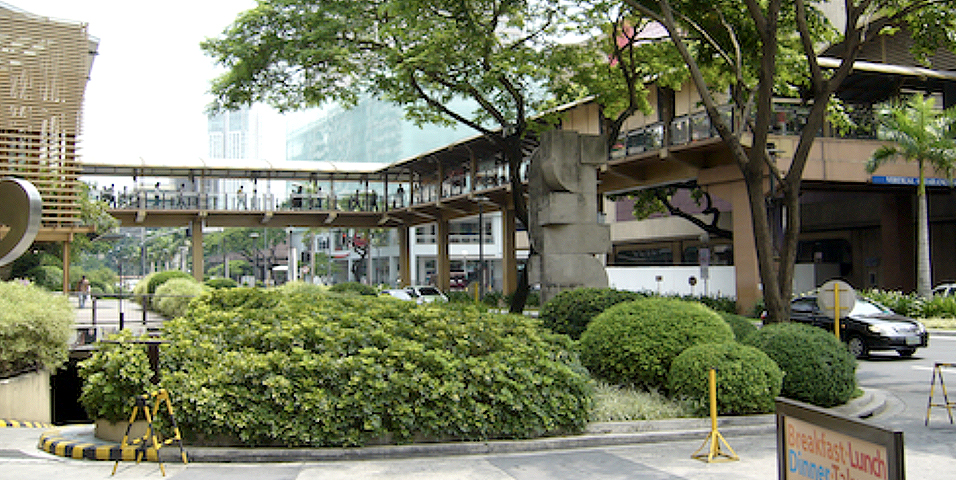 On weekdays, about 250,000 people use the covered passageways in the Makati central business district in the Philippines. Photo credit: Ayala Land, Inc.
Share on:

Development fees placed on buildings were used to improve pedestrian mobility through elevated walkways in the Makati central business district.

As business districts mature, they often have to contend with increasing traffic congestion. Unfortunately, this problem is commonly addressed with heavy infrastructure that degrades the environment and negatively affects pedestrians. The central business district of Makati City in the Philippines faced this situation in the early 1990s but rather than give way to cars, it chose to give more to pedestrians.

The central business district of Makati City has implemented a pedestrian walkway network that has encouraged more people to walk over longer distances. This was achieved through the collaboration between the developer of the business district, Ayala Land, Inc. (ALI), and its estate association, Makati Commercial Estates Association, Inc. (MACEA), using land use controls and development charges to finance and operate the pedestrian walkway network.

Ayala Land's Salvador Tan talked about the "Development of the Makati City Pedestrian Walkways" during the Urban Transport for Livable Cities Forum held in Manila in October 2019.

Makati City represents less than 5% of the total land area and population of Metro Manila as of 2018. However, it attracts an outsize proportion of traffic and people due to its central business district with a developed floor area of about 7 million square meters. The daytime population on weekdays doubles to about 1.3 million people and more than 300,000 vehicles a day pass through its streets.

The top-of-mind problem that the public wanted to be solved in the early 1990s was traffic congestion in the Makati central business district. There were calls for the widening of roads and the grade-separation of intersections, or placing the intersecting roads at different levels, so more vehicles could pass through.

Ayala Land, Inc. and Makati Commercial Estates Association, Inc.  felt that accommodating more vehicles through its central business district would not improve the urban environment and may in fact worsen it. After a series of studies and master-planning led by Ayala Land and the consultants (Roma Design Group and Ove Arup & Partners) of MACEA, it was decided that the focus will be on improving the environment for pedestrians rather than for cars in the Makati central business district.

One of the major findings of the studies was that pedestrians walk over a large network of paths and nodes centered on public transport routes and major intersections. Understanding this informal walking network enabled Ayala Land and Makati Commercial Estates Association to plan a formal network of elevated walks, pedestrian underpasses, covered sidewalks and transit sheds that could be built to better serve the needs of pedestrians.

The question then was how to finance the walkway network. Since the Makati central business district was a privately-owned and operated estate, it could not apply for or rely on public funding for infrastructure improvements. Ayala Land and Makati Commercial Estates Association was able to tap collected fees from its members to fund the walkway network.

The pedestrian walkway network in the Makati central business district currently consists of about two kilometers of elevated walks, about four kilometers of covered walks, seven pedestrian underpasses with eight under construction, and two pedestrian overpasses. These facilities are used by about 250,000 people per day on weekdays, with an average walking distance of about 700 meters per trip, higher than the 400 meters per trip before the walkway network was implemented.

Sidewalk bulb-outs or curb extensions at minor intersections are currently being implemented within the central business district to calm traffic and facilitate pedestrian crossings. At the same time, these enhance the landscape and seating in the urban environment. The entry portals into the pedestrian underpasses are being replaced with a more modernist design along with the painting of murals within the underpasses to promote public art in the central business district.

A large city bus terminal is currently under construction beside a major light rail station in the central business district which will be connected to the elevated walk network to create a rail-bus interchange for commuters and pedestrians. Future plans to extend the elevated walk to a planned commuter rail station beside the central business district and addition to organized route transit sheds for public transport stops are currently being considered.

Z. Galingan et al. Pedestrian-Friendly Streetscape in a Tropical Business District. MUHON: A Journal of Architecture, Landscape Architecture and the Designed Environment. University of the Philippines College of Architecture. Issue No. 3. pp. 9-15. 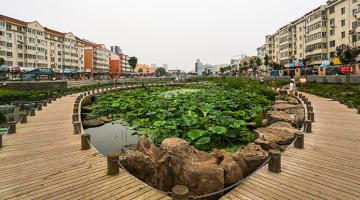 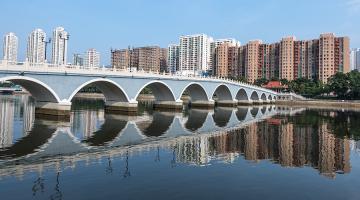 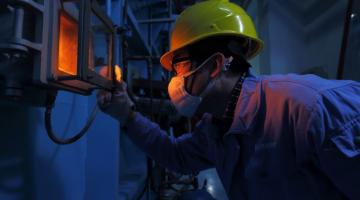