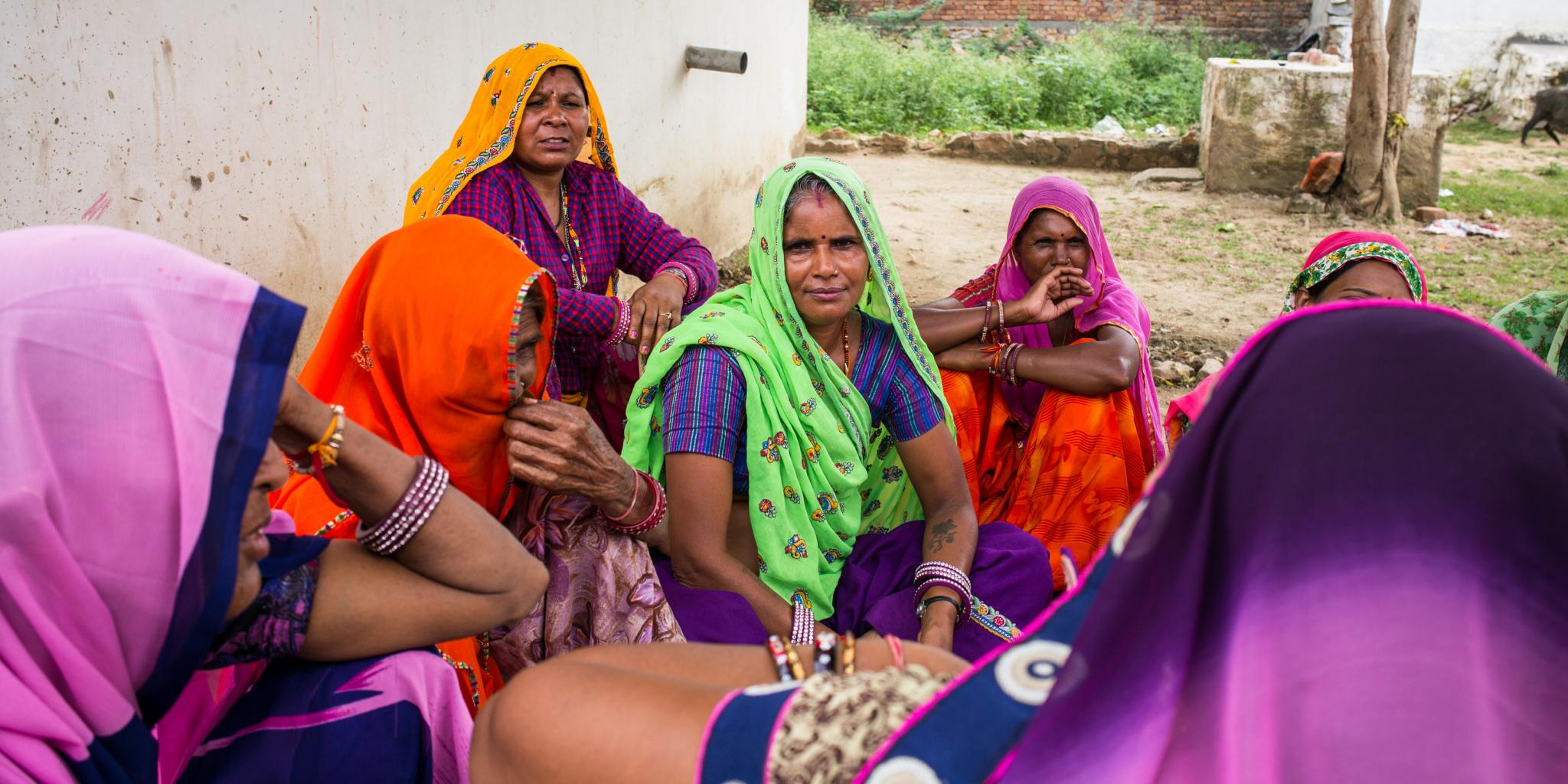 Along with other populous countries, India was among those with wider disparity in terms of health and survival of women according to the World Economic Forum's Global Gender Gap 2021 report. A substantial body of research has shown that gender bias in health care inputs leads to worse health outcomes for females. Over the past 15 years, the Indian government has scaled-up health insurance programs that entitle poor households to free hospital care with the explicit goal of ensuring universal and equitable access to health services. Analyzing administrative data on millions of insurance claims, researchers from Stanford University documented striking gender gaps in insurance utilization, particularly among young children and the elderly. These disparities persist despite substantial program expansion and are driven in part by households being willing to allocate fewer resources to female than male health.

To study gender disparities in hospital visits and patterns of care-seeking, the researchers compiled and analyzed administrative data on insurance claims filed for all 4.2 million hospital visits between the program’s launch in December 2015 and late 2019.

They first documented large gender disparities in hospital visits under insurance. Females accounted for only 45% of all hospital visits under the Bhamashah program with the biggest gaps among children under 15 years (33%) and adults 50 years and older (43%) as shown in Figure 1. These gaps are far larger than can be explained by Rajasthan’s skewed population sex ratio. Differences in underlying health needs also cannot account for these gaps: across several health conditions, the female share of hospital visits under the insurance program is over 10 percentage points lower than would be expected based on gender-specific illness prevalence estimates for India. The researchers estimated that there are over 225,000 missing female hospital visits between 2017 and 2019 for nephrology, cardiology, and oncology care alone. As a result of these gaps, public spending is effectively pro-male. Even inclusive of obstetric care, program spending on females in 2019 amounted to 44.4% of total spending. In contrast, in the United States, around 57% of yearly spending under Medicaid, the country’s health program for low-income people, is on females. 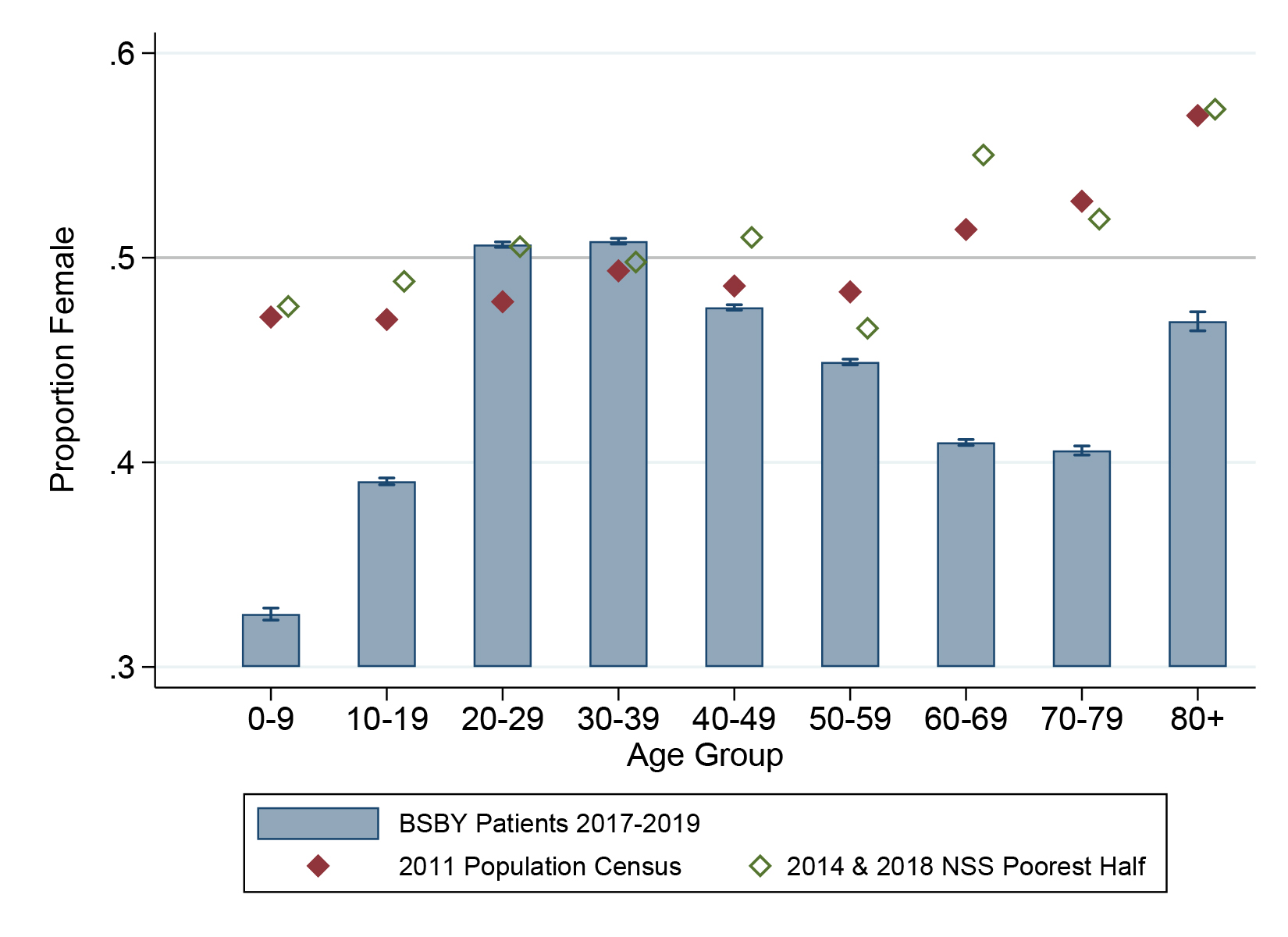 Source: Shorenstein APARC
BSBY = Bhamashah Swasthya Bima Yojana, a government health insurance program for low-income individuals in Rajasthan, India.
NSS = National Sample Survey.
Note: The blue bars represent the share of BSBY insurance claims within each group that are for females. The red diamonds are the female share of the population in the 2011 Population Census and the green diamonds are the female share of the poorer half of the population, which approximates the BSBY-eligible population, in the 2014 and 2017 rounds of the National Sample Survey.

Importantly, gender disparities increased over 4 years of implementation, suggesting that expanding access alone is insufficient to close gender gaps. Although the program expanded rapidly, going from roughly half a million hospital visits in 2016 to 1.2 million visits in 2019 (excluding childbirths), the female share of visits decreased from about 48% to 44% over this period (Figure 2). 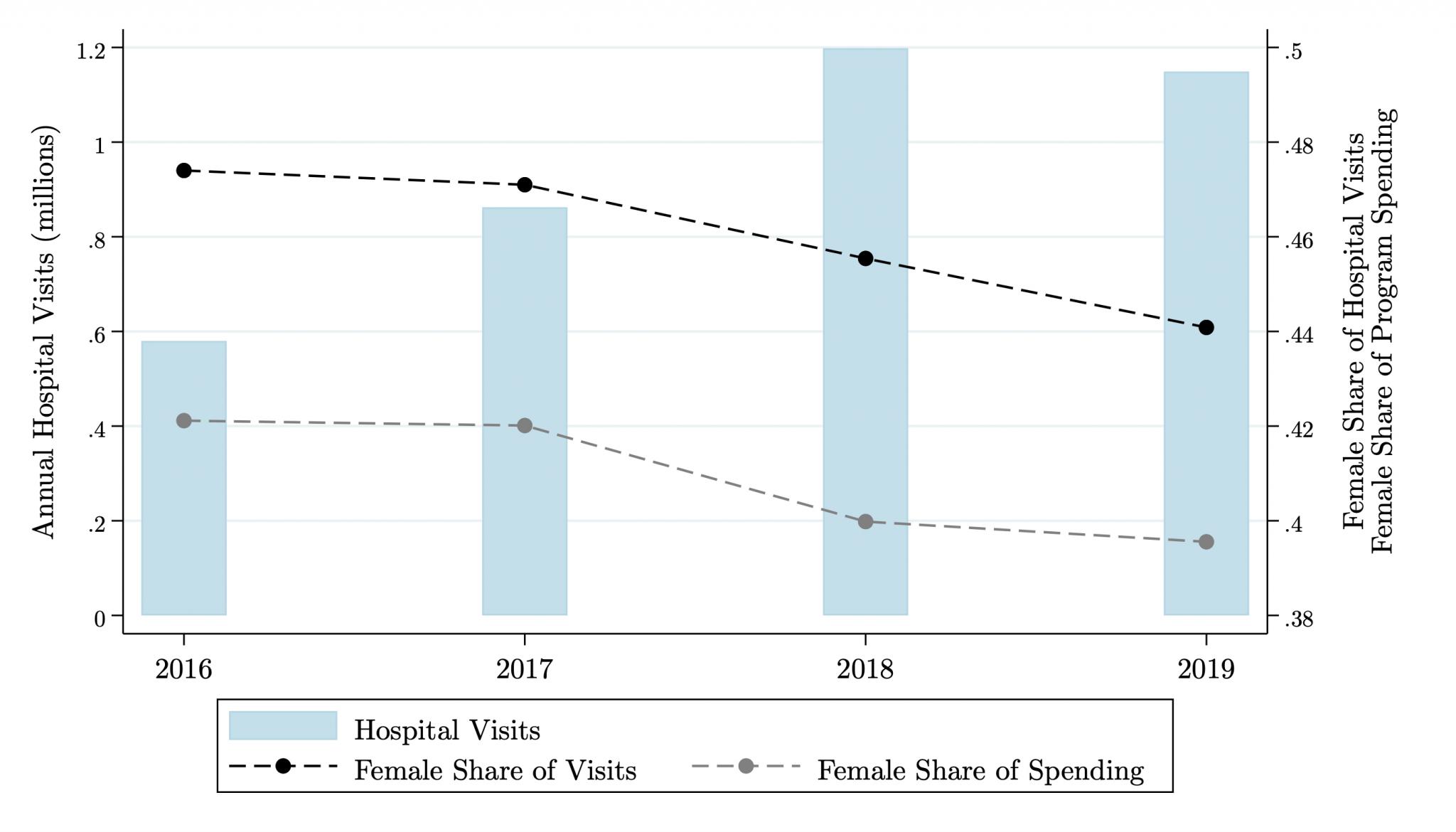 The researchers provided evidence that gender-biased resource allocation within the household contributes significantly to these gender disparities. Although the Bhamashah program substantially subsidizes health care costs, it does not eliminate them entirely because hospitals continue to charge patients (against program rules) and the program does not cover travel, lost wages, and other incidental costs. The study shows that these care-seeking costs, both in the form of hospital charges and distance to the nearest hospital, disproportionately deter care-seeking for females. Households also travel further for male than female care. These findings suggest that households value and are willing to allocate more resources to the health of males than females, which results in gender disparities because care-seeking is not free.

The researchers next examine what happens to gender disparities when the cost of care-seeking is reduced. They used the empanelment of new hospitals near villages, which reduces the distance to the nearest private hospital accredited under the Bhamashah program and, therefore, the travel cost of getting care. They found that both female and male hospital visits increased immediately and significantly, but the female share of visits remains unchanged. This leads to a key insight of the paper: in the presence of gender bias, lowering costs may not reduce disparities because men may benefit as much as (or more than) women.

Finally, the researchers link insurance claims data to data on three rounds of village-level council (gram panchaya) elections and show that local female political representation modestly reduces disparities in insurance utilization. The effects appear to be driven by long-term increases in maternal and child health investments and increased female agency, consistent with prior research in the Indian context showing that exposure to female leaders in government can reduce bias in perceptions of, and aspirations for, women and increase investments in female health (Beaman et al. 2009, Beaman et al. 2012, Bhalotra and Clots-Figueras 2014). This result demonstrates that interventions that counteract gender bias by strengthening the position of women can have downstream, complementary effects on unrelated health policies. However, the process is slow and effects may be small. Addressing inequality in health programs will require more targeted actions.

The study’s finding that a large universal health coverage policy that heavily subsidizes hospital care has not reduced gender disparities over 4 years of implementation goes against the general assumption that expanding geographical access and reducing the costs of healthcare will automatically reduce inequalities. Such gender-neutral policies may increase female levels of utilization, but closing gender disparities requires strategies that explicitly target barriers to female care-seeking and gender bias. Examples of gender-targeted interventions being tested in different Indian states or that hold promise include information campaigns that focus on reaching women, female-friendly transport services, outreach by village health workers and female political leaders, and additional insurance benefits and subsidies earmarked for females. However, the findings from this paper show that, in the presence of nuanced gender dynamics, policies may not have the intended effect on gender disparities and require careful evaluation before being scaled up. 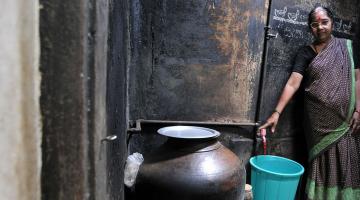 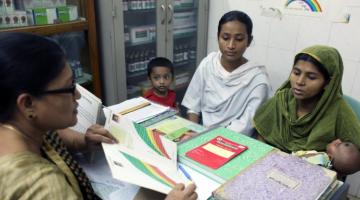 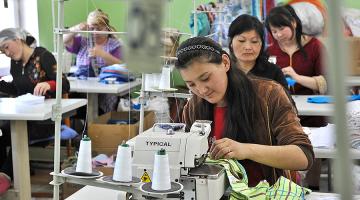