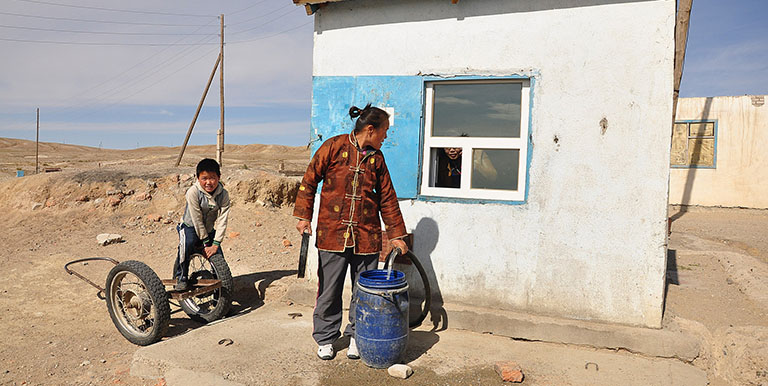 A multitude of positive gender impacts are possible through small infrastructure investments.

Ger areas in Mongolia are informal, unserved, or underserved urban settlements characterized by long strips of large plots of land and lack of basic services. In 2006, the Asian Development Bank funded a project that aimed to improve the living conditions and quality of life of the people in these areas. This led to the upgrade of basic urban services, urban roads, and on-plot facilities in the target communities.

Women are primarily responsible for retrieving water for households – this is a daily time-consuming activity. Ger area residents, especially women, had to wait, sometimes long hours, for water trucks to arrive. There was often a shortage of water. Likewise, residents of Bagh Rashaant would have to walk for 10 minutes just to collect water. They may make several trips a day to get the amount that they need.

Parents who take their children to school in downtown Ulaanbaatar would have to walk with their kids all the way to the junction on the dusty dirt road or get an expensive micro-bus to the main junction, and then another bus to the school twice or thrice a day.

The old access road to Orbit Takhilt, which has a population of 27,144 or 7,540 households, was a dusty dirt road with no dedicated paths for walking. Several women interviewed said they had to walk down the unsafe and unlit road or take expensive micro-buses from the junction as they have no other option.

The ADB-supported Mongolia Urban Development Sector Project responded to some of these challenges by providing roads and water supply to eight ger areas across the country. A project Gender Action Plan helped to identify gender issues and ensure direct gender benefits, such as:

“Assessment of and planning for gender issues up front helped to ensure the achievement of the multitude of positive gender impacts which are possible, even from small infrastructure Investments,” says Tuul Badarch, Senior Project Officer at ADB’s Mongolian Resident Mission.

Provision of water supply to households, schools, and kindergartens

The project installed 58 new water kiosks and refurbished 33 water kiosks, which provided direct gender benefits in the form of immediate, adequate, potable, safe and more accessible water to 41,611 households in five project areas with 135,370 residents, 51% of whom are female.

With the new and refurbished project kiosks, a continuous supply of water is now available, and the time burden for accessing water has been reduced.

In Erdenet, 65% of ger residents now have access to safe drinking water within 200 meters of their homes, compared to the baseline of 45% in 2010. They no longer have to make several trips a day to far water sources.

“The safer water kiosks with its fewer transfer points also reduced risks of contamination,” said Munkhnairamdal, who manages one of the kiosks. She said water is directly supplied to the kiosks through pumps and pipes.

Kindergarten children have also benefitted from the direct water supply provided by the project. At Erdenet Bagh No. 11 kindergarten, which has 140 students, teachers said, “Until May 2014, the water was delivered in water trucks and stored in large water drums outside. In winter, the water froze and the ice had to be broken and melted. Previously, much time was wasted waiting for the water trucks. The provision of water connections directly to the kindergarten has greatly enhanced the kindergarten facilities and has been more cost-efficient than water supplied by water trucks.”

The Gender Action Plan promoted equal work opportunities for women. Nearly half or 39 of the 86 people who were employed at water kiosks, water reservoirs, pumping stations, and sewage treatment plants were women. They are now permanent employees of the Public Utility Service Organization. Ensuring that employment opportunities were flexible, community-based and close to women’s ger area homes contributed to increased female employment. This feature is an important lesson learned for future projects – ensuring that employment options are adapted to the needs and time constraints of women.

New road leads to the building of a new school

Thanks to a new ger area access road between the outskirts of Ulaanbaatar and the new school, ger area residents especially the parents save a few precious hours every day because the trip to the school with their children now takes only ten minutes on foot.

“Because of the new road that allows easy access to this outer ger area, the residential area has expanded in the last few years so that a new school was needed,” Oyunkhushing of Ulaanbaatar expressed. “They built the local school because of the good road.”

ADB’s investment in the road became a catalyst for the building of the government-funded school in 2012. Two female teachers, Enkhtsetseg and Ariunaa, said the number of students has grown rapidly from 600 to 1,050 (60% of them girls) between 2013 and 2014. “Previously, the children had to go to school in the downtown area. Now, there is a school right in the middle of their ger area,” they said.

In Orbit Takhilt, Baruun Salaa, and Khailaast ger areas in Ulaanbaatar, three access roads, totaling 12.3 kilometers, have been built by the project with dedicated bus stations, street lighting, and safe pedestrian paths on both sides of the roads.

Now, the more affordable public transport buses provided by the municipality go all the way down to the end of the road where the last ger area residences are located. Female residents reported that they feel more secure as a result of the well-lit, dedicated walking paths.

The other feature of the project’s Gender Action Plan is the microfinance component which will enable 1,000 women from 1,000 ger area households to improve their on-plot facilities, including direct water connections. Female-headed and low-income households are encouraged to apply for small loans. To help promote women’s voice and legal representation, the Gender Action Plan includes a gender target: at least 30% of the loan and legal documents will require women as signatories or co-signatories.

“The approach taken in the Mongolia Urban Development Sector Project is not a one-off effort,” noted Wendy Walker, Social Development Thematic Group Chief of ADB. “This project represents one of the first concerted efforts at gender mainstreaming with a Gender Action Plan by ADB in Mongolia. Subsequent ADB urban projects focused on ger area development have built on the experience of this project, and include Gender Action Plans that seek to positively strengthen the project impact on urban ger area populations, particularly for women.” 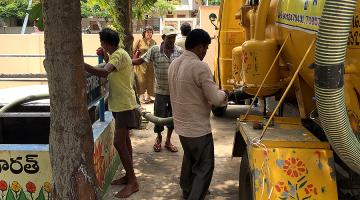 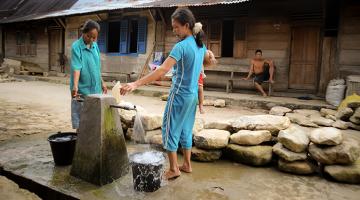 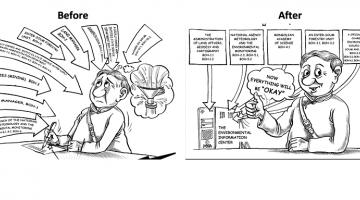 Transforming a Business District into Walkable Space with Private Financing