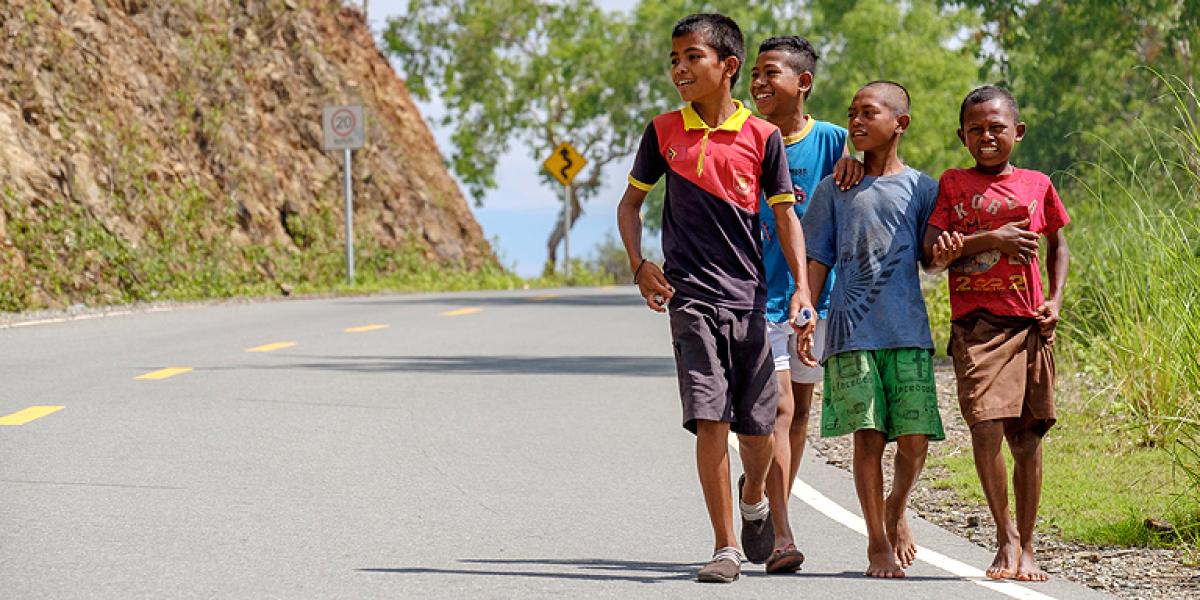 Tackling undernutrition in children under 5 years of age requires political will, resources, and a focus on results.

Timor-Leste is in the midst of a silent emergency—poor nutrition. Despite progress in improving public health services, almost half of children aged under 5 still show signs of serious undernutrition. The most pressing concerns relate to micronutrient deficiency and stunting.

Poor nutrition among mothers and young children poses an immediate burden on health and reduces the potential of the population to be productive. At an individual level, undernutrition can lead to a tragic waste of human potential. At a collective level, the failure to address undernutrition will impose a long-term burden on the country through lower human capital and reduced productivity.

This policy brief is adapted from the Pacific Economic Monitor of the Asian Development Bank. It discusses the economic impact of undernutrition, some of the causes of poor nutrition, and measures to accelerate improvements in nutrition.

Undernutrition in children leads to increased burden from other illnesses, higher rates of mortality, and permanent reductions in cognitive ability. Nearly a third of child deaths in the country can be linked to the poor nutritional status of either the mother or the child. Cross-country analysis has shown that children who are stunted typically begin school later, have lower educational attainment, and earn lower wages as adults. Part of the link between undernutrition and poor educational performance is due to the impact of nutrition on physical health.

Figure 1: Prevelance of Stunting in Timor-Leste and Other Countries 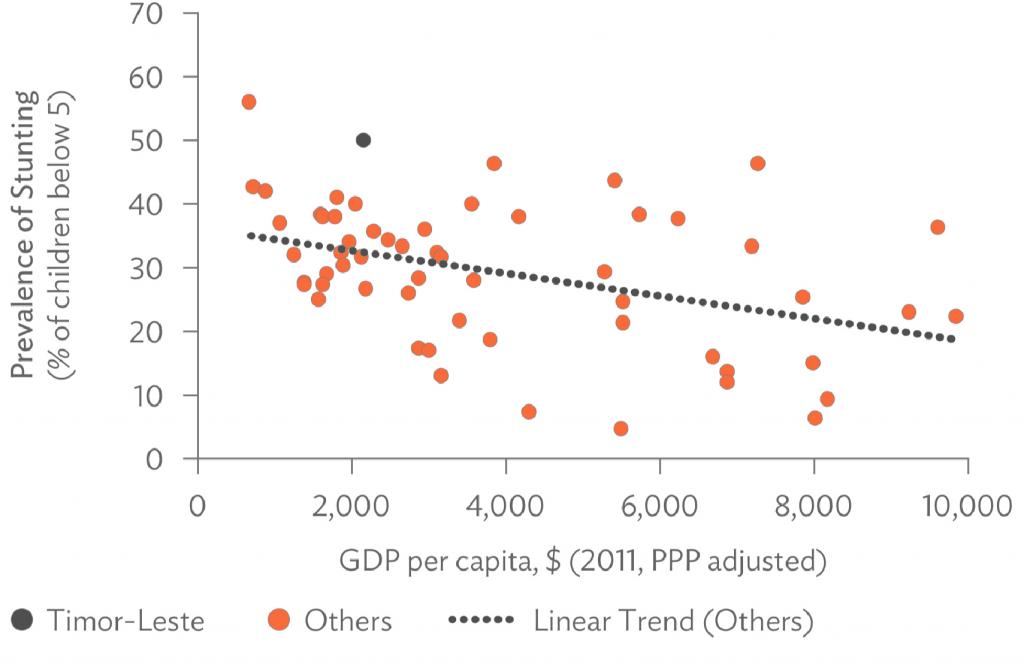 The legacy of past undernutrition will have far-reaching impacts in Timor-Leste. Even if undernutrition is eliminated tomorrow, the country would continue to experience some loss of productivity until around 2080 when the last workers who experienced undernutrition as children reach retirement age. There is, therefore, an urgent moral and economic case for investing in improved nutrition.

The immediate causes of undernutrition are disease and inadequate diet. Underlying causes include a lack of food, poor sanitation, poverty, illiteracy, high fertility rates, and high rates of teenage pregnancy. In Timor-Leste the prevalence of stunting in children aged under 5 increases as children grow from newborn babies into toddlers. This pattern is partly caused by poor feeding practices.

Figure 2: Conceptual Framework on Causes of Malnutrition in Timor-Leste 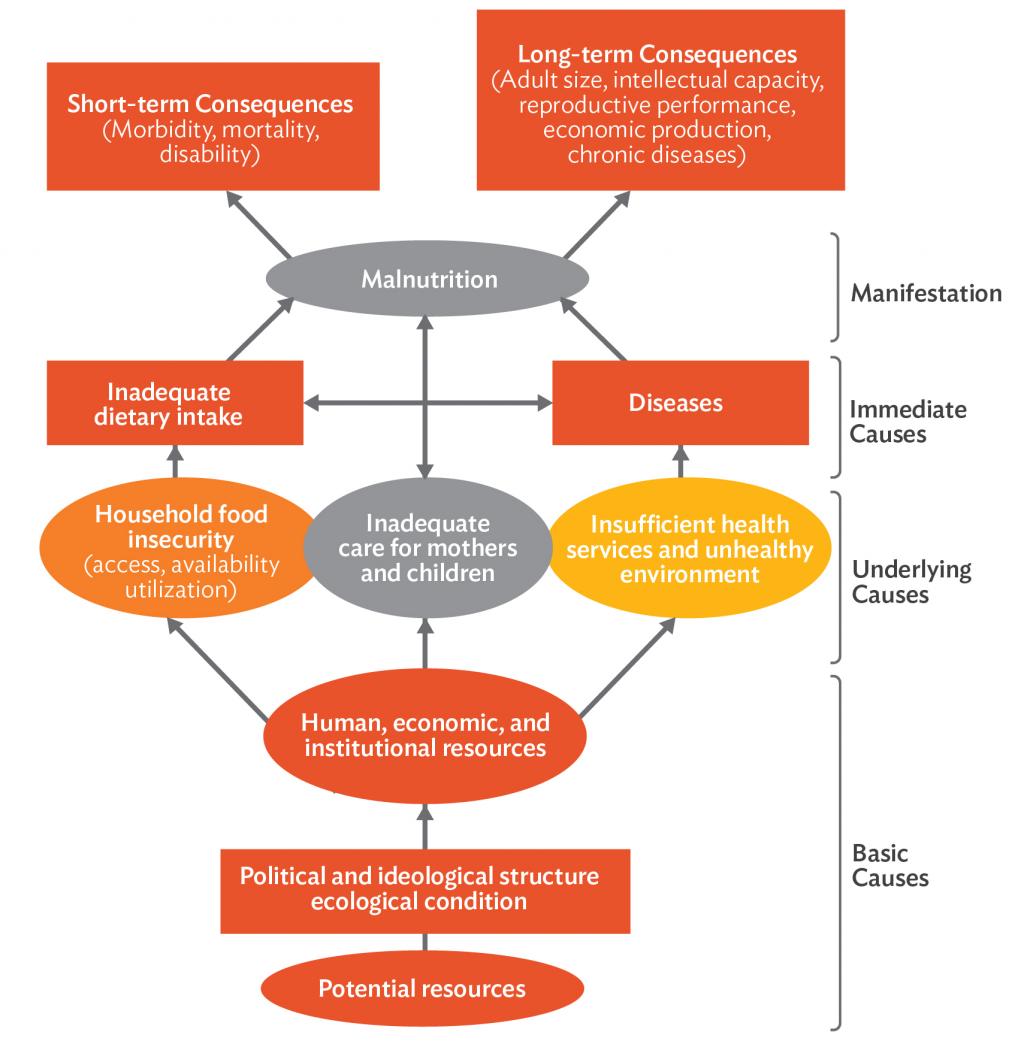 The World Health Organization recommends that newborn babies should be breastfed within 1 hour of birth and should be fed exclusively on breast milk during the first 6 months of their life. In 2009, 81.7% of Timor-Leste babies began breastfeeding within the first hour of birth. However, by 2016 this had fallen to 75.2%. There is also evidence that parents struggle to manage the introduction of solid foods and ensure sufficient nutritional diversity and frequency of feeding.

Poor infant feeding practices also reflect broader problems with food availability. Analysis suggests that around one-third of Timor-Leste’s population suffers from chronic food insecurity and this is partly due to low agricultural productivity. In 2015, 73.4% of all households in Timor-Leste lived in rural areas and 46.0% of households were involved in subsistence agricultural production.

Cross-country studies have also found evidence that access to clean water and improved sanitation is an important enabler of improved nutrition outcomes. The most recent Demographic and Health Survey highlighted that many households in rural areas still lack access to improved water sources and that a significant proportion of households in both rural and urban areas do not treat water to ensure potability.

Public health services play an important role in providing support to pregnant women and mothers of young children. Unfortunately, the health system is not currently able to identify and treat most underweight children

The Government of Timor-Leste has committed to ending hunger and undernutrition and has developed policies and plans to achieve this goal. It established the National Council on Food Security, Sovereignty, and Nutrition in 2010 to promote interagency coordination on nutrition. Its Strategic Development Plan 2011–2030 and Roadmap for Achieving the Sustainable Development Goals both emphasize nutrition.

In 2014, Timor-Leste was the first country in Asia to join the Zero Hunger Challenge. The associated action plan for eliminating hunger and malnutrition comprises 170 actions with an indicative budget of $176 million over 10 years. This action plan is complemented by the National Nutrition Strategy 2014-2019 and the 2017 Food and Nutrition Security Policy.

While the development of national policies and plans can be taken as a sign of political commitment, there is a need for greater urgency in tackling undernutrition.

A well-designed program of communication to households could help to ensure that parents truly understand the requirements for achieving good childhood nutrition and the implications of malnutrition. Strong leadership from high-proﬁle national leaders would help to ensure the effectiveness of this communication and create a stronger sense of shared purpose in tackling undernutrition.

Efforts to improve communications should be allied with additional resources to implement nutrition-related programs, expand access to nutritious and affordable foods, and strengthen the systems for monitoring progress.

The lack of effective monitoring is a serious concern. Although improving nutrition is a national priority, problems with the collection of anthropometric data in the 2016 Demographic and Health Survey mean that there are no reliable national estimates of the prevalence of undernutrition since 2013. Reliable information is crucial for incentivizing performance, analyzing the impact of speciﬁc initiatives, and improving the efficiency and effectiveness of programs.

Increasing the frequency, timeliness, and quality of data collection is a key step in ensuring that political leaders, policymakers, service providers and other stakeholders have access to information and can exercise mutual accountability. There may be scope to improve the collection of data by health workers and government staff who monitor food production and food security. However, the establishment of a dedicated mechanism for monitoring progress should also be considered. This could take the form of an independent team that is tasked with data collection and analysis to produce an annual nutrition report tracking progress in reducing undernutrition in each of Timor-Leste’s 13 municipalities.

More timely information about nutrition outcomes in each municipality would be useful given the signiﬁcant variation in the underlying causes of malnutrition in each municipality. It could also help to leverage the ongoing transfer of responsibility for some services from the central government to the municipal level. To fully leverage decentralization, political leaders should continue to emphasize the importance of improving nutrition, communicate a clear expectation that nutrition outcomes will improve, allocate resources for nutrition-related interventions, and encourage service delivery agencies to innovate.

Collaboration between central government agencies, municipal administrations, and development partners could be used to try new interventions, such as enhanced outreach and support to pregnant women and families with young children, nutrition-sensitive agricultural extension services, and conditional cash transfer programs to ensure that mothers have the resources to improve dietary diversity and protein intake.

The government should also work to expand the provision of special energy and micronutrient dense foods for young children aged 6 to 23 months who are at risk of undernutrition and should consider establishing national food fortiﬁcation programs to improve the general health of the population. Virtually all households in Timor-Leste use iodized salt and as a result, there is almost no problem with iodine deﬁciency. Fortiﬁcation of imported rice would be a relatively straightforward way of increasing the consumption of a range of micronutrients including iron and Vitamin A. Rice fortiﬁcation could support a reduction in the incidence of anemia in women and children and would be relatively easy to implement at scale when compared to other potential strategies such as distribution of supplements or increased consumption of iron-rich foods.

Timor-Leste Ministry of Health. 2014. The Economic Consequences of Under-nutrition in Timor-Leste. Dili.

David Freedman was ADB’s Timor-Leste Country Economist. Before taking this position, he worked for ADB’s Pacific Private Sector Development Initiative in Papua New Guinea, and was an Overseas Development Institute Fellow at the PNG Sustainable Development Program. He has a B.Sc and M.Sc in Economics from the University of Nottingham, England. 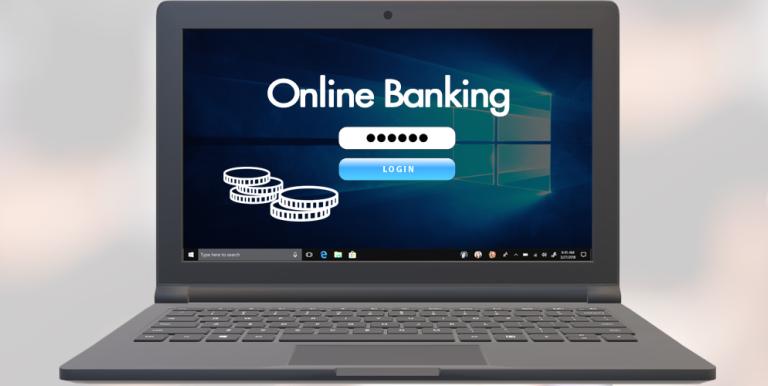 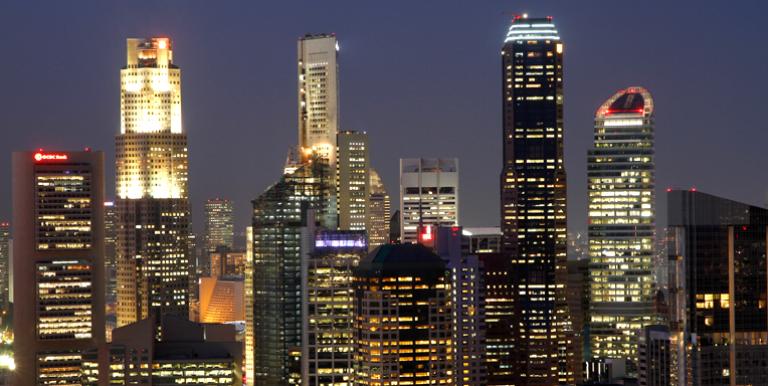 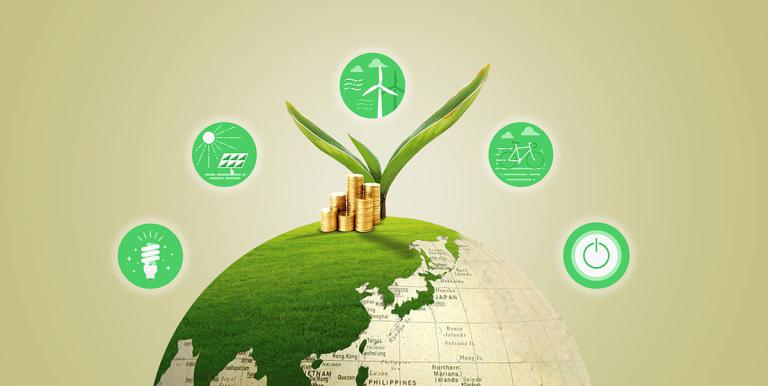