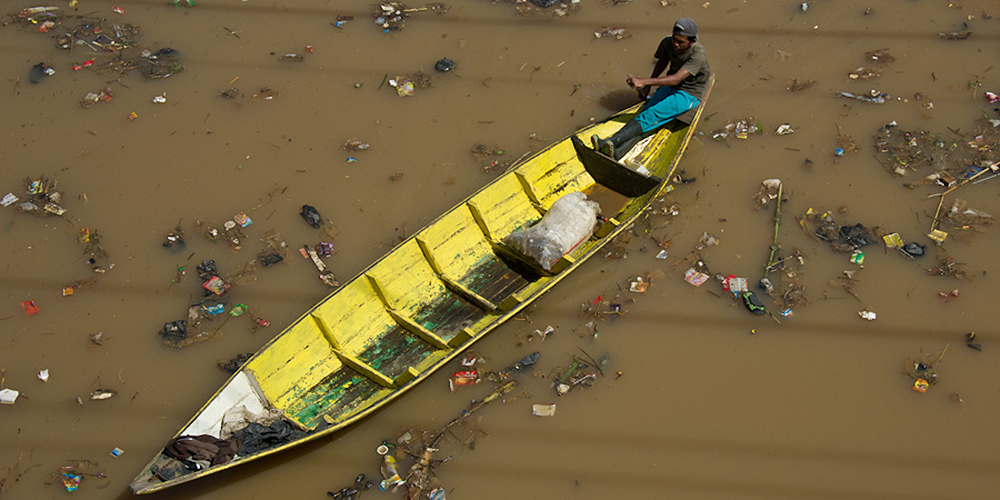 In Indonesia, a rating system encourages companies to step up efforts in controlling water pollution.

In the 1980s, water pollution was severe in Indonesia because of rapid industrialization, population growth, and urbanization. To arrest environmental degradation, the Government of Indonesia launched a public disclosure program that evaluates a firm’s environmental compliance based on a five-color performance rating scheme. The program yielded quick and positive responses in raising the level of compliance among industrial firms and in substantially reducing millions of tons of pollution effluents in the country.

Indonesia has invested intensively and extensively in industrialization to transform itself from a poor, agriculture-based economy into one of the biggest industrial powerhouses in Southeast Asia. In the 1980s, the country’s iron and steel production increased over four-fold. Other industrial sub-sectors—producing footwear, textiles, paper products, glass, metal products, and transport equipment—doubled their output as well. This development helped improve the average real income in Indonesia since 1980 and lift many Indonesians out of poverty since 1970.

Environmental degradation worsened in Indonesia, especially in and around the industrial areas. Airborne concentrations of suspended particulate matter in Jakarta exceeded by 40% the air quality standard recommended by the World Health Organization in 1978. Rivers were contaminated by industrial discharge. Biochemical oxygen demand (BOD), which measures the amount of oxygen consumed by aerobic biological organisms in breaking down organic matter present in a given water sample, rose rapidly from 3 to 6 milligrams per liter to over 10 milligrams per liter during the early 1980s to the early 1990s.

The Ministry of Population and Environment established the Clean River Program (Program Kali Bersih or PROKASIH) to mitigate damage to the environment. Under the control and administration of the Environmental Impact Management Agency (Badan Pengendalian Dampak Lingkungan or BAPEDAL) which reported directly to the President’s office, the program set effluent discharge standards for some industrial sectors in 1991. However, in later years, the expansion of such standards to more sectors was far from successful. BAPEDAL lacked the capacity to make the companies comply, and authorities failed in 90% of environmental and health court cases. 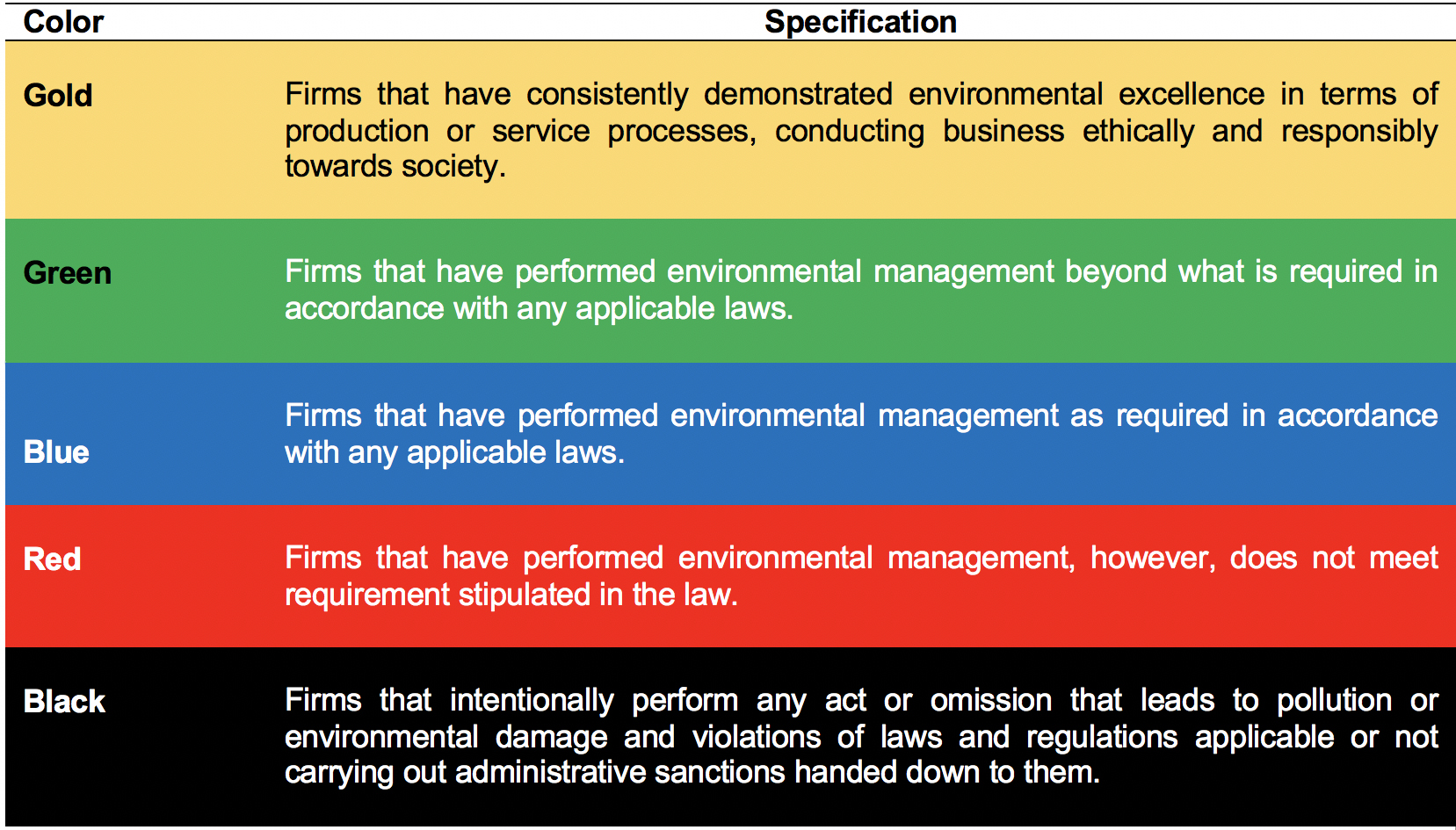 These colors correspond to the different levels of pollution control performance. With gold and green, the regulators aimed at encouraging clean technology adoption. With blue, red, and black, they are expected to use social pressures to promote compliance. Firms rated gold and green are praised publicly, giving them competitive advantages in the market. Those rated blue, red, and black are put under legal enforcement and public pressure, therefore influencing competitiveness. 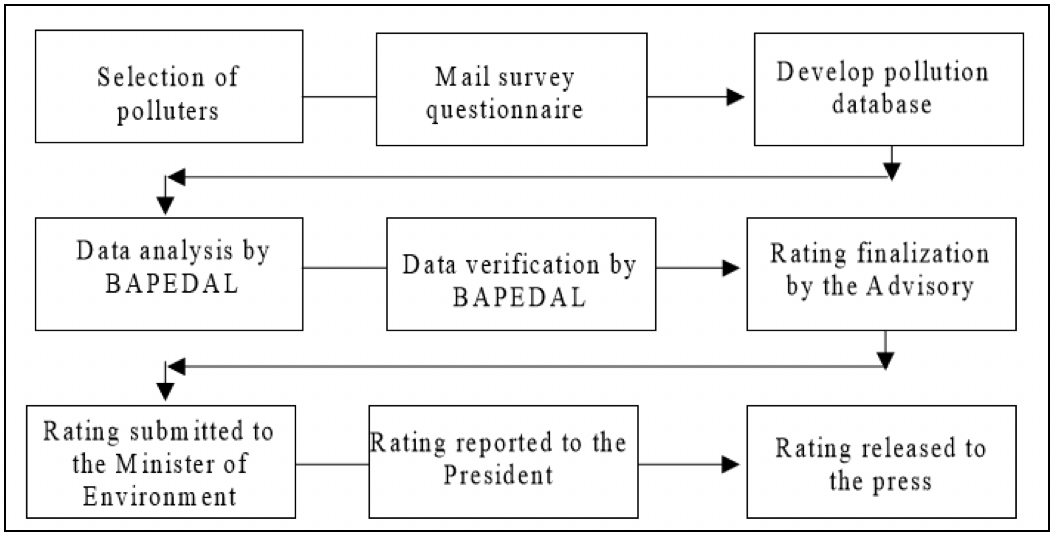 PROPER considers both compliance and out-of-compliance criteria in its evaluation. The former refers to aspects related to controlling and monitoring pollution, while the latter includes aspects that are related to efficiency in consuming, producing, and internalizing environmental and social costs. The program’s scheme was considered intelligible and informative to the community, media, and consumers.

The full rating results are disclosed, industry by industry, along with the announcement of the PROPER Award for Gold and Green Rated Companies, giving the compliant firms heavy media coverage and positive publicity.

Prior to the financial crisis of 1997, PROPER only covered a few industries. When the program was revived in 2002 it was expanded from manufacturing to also include agriculture, mining, and oil and gas sectors.

PROPER increased the compliance rate to 41% from 36% in just 6 months among industrial firms. The response was immediate and remained positive in the following months with over a quarter of the firms rated red or black in December 1995 improving to blue or green by September 1996. In addition, in less than 2 years (June 1995–March 1997), PROPER improved the compliance rate of the companies in the pilot program to 51% from 35%.

Using data from this initial period, García et al (2007) found that there was indeed a reduction in emissions intensity particularly for those firms that initially had a poor compliance record. The total estimated reductions in pollution concentration for these firms were approximately 32% in BOD and chemical oxygen demand (COD), or the amount of dissolved oxygen needed to oxidize chemical organic materials in water.

By regulation, participation is compulsory for selected firms. However, several companies started to join the program voluntarily. From only 187 firms in the first wave of ratings in June 1995, the number of participants reached 1,317 in 2012. 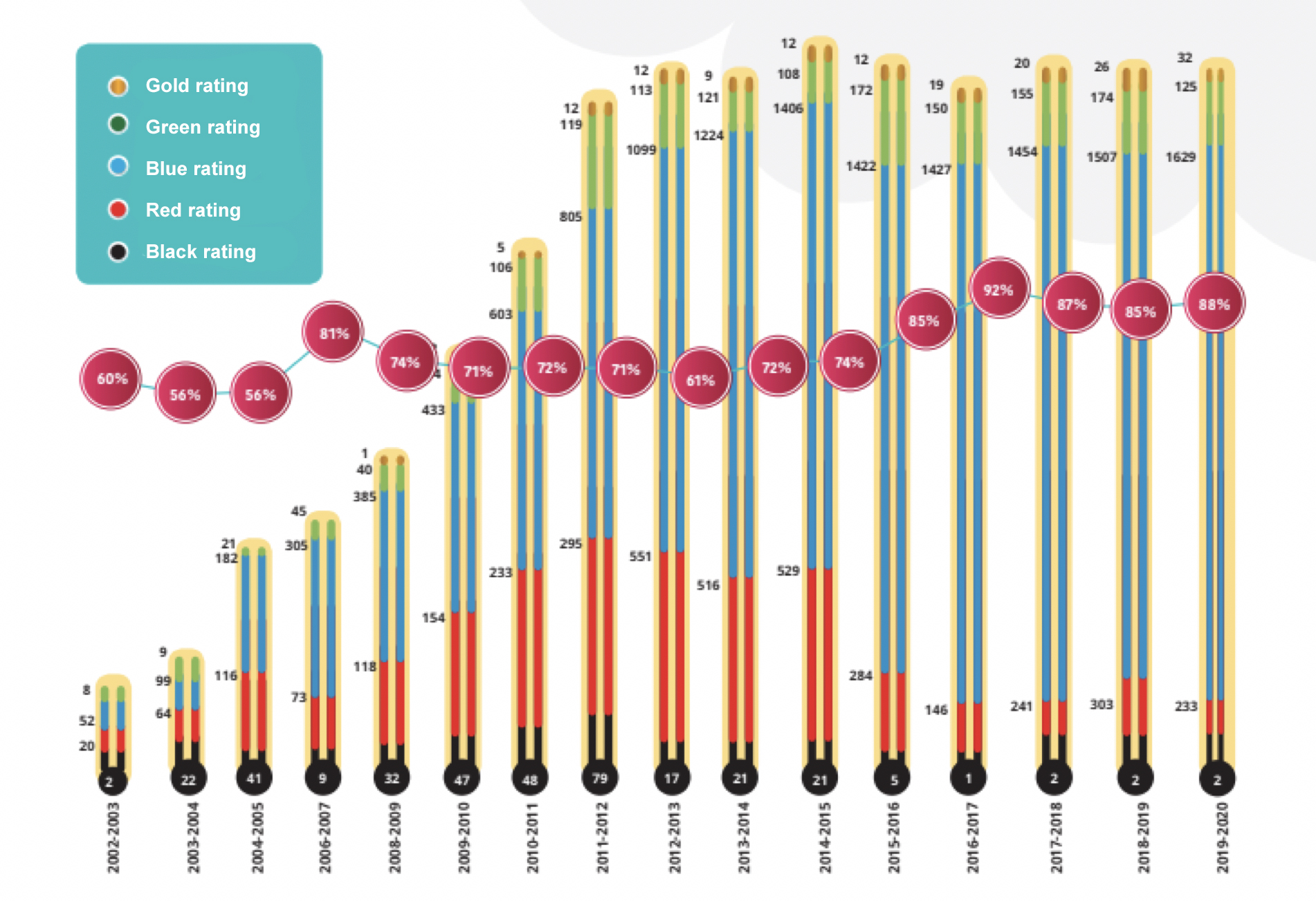 After the 1997 financial crisis, PROPER continued to see growing compliance rates, from 60% in 2002-2003 to 88% in 2019-2020. During this period, the program also expanded its scope from water pollution control to a wider set of sustainability criteria promoting resource efficiency, community empowerment, the internalization of environmental and social costs, and disaster response. Participating companies have adopted a growing number of innovations to address energy and water efficiency, greenhouse gas emissions reductions, and waste management. Additionally, the period covering 2019-2020 saw the high numbers of firms rated as gold (32), green (125), and blue (1,629), out of 2,038 companies representing agribusiness, manufacturing, and oil and gas industries.

Even with these successes, PROPER encountered some resistance, particularly from some civil society actors. Some reports suggest that public information, transparency, and capacity-building efforts on the assessment process and NGOs’ participation were absent. Some NGOs and community groups have also criticized PROPER's assessments based on weak environmental standards, which may have prevented companies from undertaking further environmental quality improvements (Fitri 2013, Indonesia Center for Environmental Law 2013, and Wahana Lingkungan Hidup Indonesia 2012).

PROPER has been a successful example of an information disclosure instrument to increase compliance and pollution reduction. PROPER benefited from accurate information from validated data sources, giving the program credibility and trustworthiness. It also had strong political support and community willingness to participate, with increasing participation among firms. The program put pressure on public agencies such as BAPEDAL to improve its technical capabilities, such as data collection and analysis.

As the first such program in the developing world, PROPER also faced many first-mover challenges including credibility, uncertainty of public reaction, selection of participants, and sufficiency of media coverage. In addition, relatively high operation costs kept the program from expanding beyond selected regional clusters.

To expand its impact and success, PROPER must:

PROPER’s success shows that the public at large, when empowered, can effectively monitor aberrations and violations in pollution control, as well as encourage good performance and movements toward green economy.

The following are lessons emerging from the program:

Indonesia Center for Environmental Law. 2013. Strengthening the Right to Information for People and Environment: Case Study from Indonesia.

I. S. Y. Fitri. 2013. An Assessment of Stakeholder Participation in Companies' Environmental Performance Rating: The Case of Indonesia's PROPER Program. 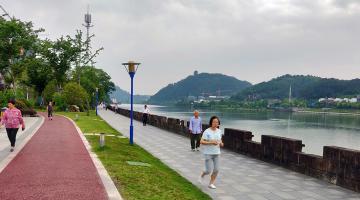 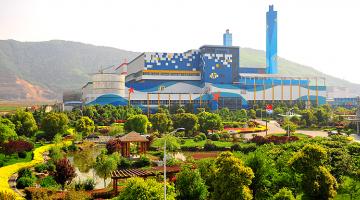 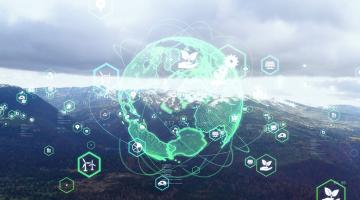