Revitalizing a City by Reviving a Stream 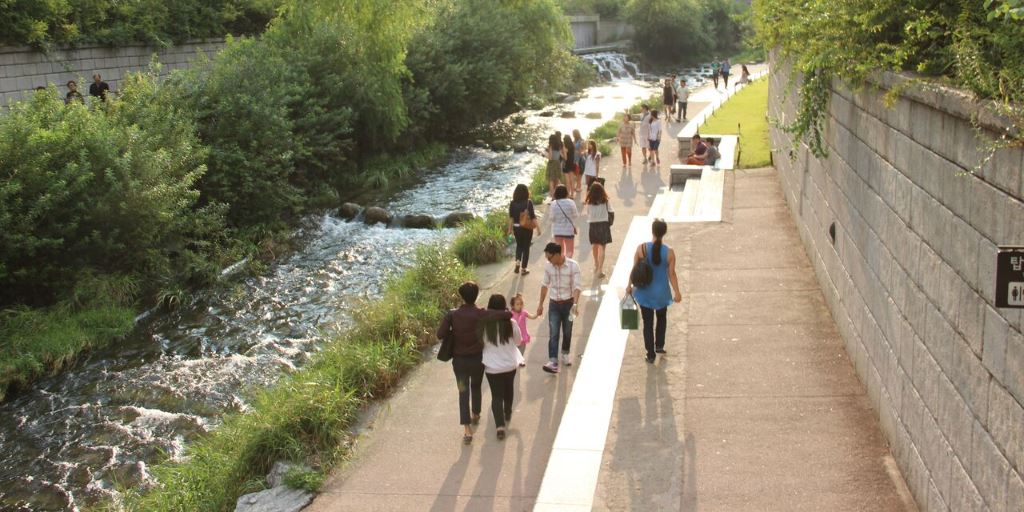 Seoul dismantled an old highway and revived a stream, the city, and local spirit, through the creation of the Seoul Greenway.

The Cheonggyecheon stream revitalization project in downtown Seoul is a triumph of urban renewal. The heart of the city is now a green waterfront park complemented with improved public transport, giving citizens with a better way of life.

Prior to restoration, Cheonggyecheon was a dilapidated roadway and expressway with more than 168,000 cars passing every single day. But instead of investing millions of dollars to upgrade this congestion-inducing and pollution-producing behemoth, the city government—in a landmark decision—opted to demolish it.

Then Mayor Lee Myung-bak, who eventually became the President of the Republic of Korea, led the project. Said to have contributed to his political win, the restoration turned Seoul into a global metropolis with a mind for sustainability. 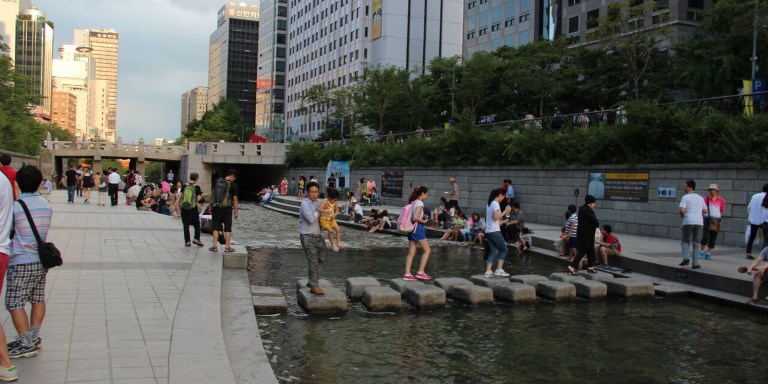 Cheonggyecheon was once a landmark stream steeped in history. Cutting across Seoul, Cheonggyecheon—which translates to clear valley stream—became a victim of urbanization towards the middle of the 20th century. The riverside was lined with shanties and sanitation became an issue. To resolve this, the river was covered with concrete and turned into a 6 km roadway around the late 1950s. By 1971, Cheonggyecheon had a 5.8 km 6-lane elevated highway to accommodate the increasing vehicular traffic in the capital. 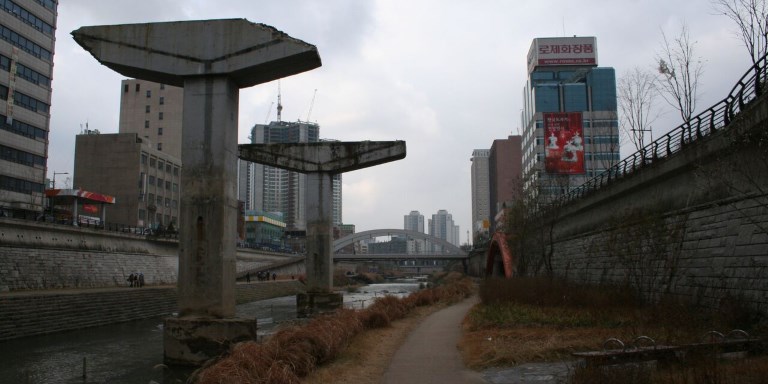 For a while, this infrastructure served its purpose. Seoul became a bustling city with its largest commercial center situated in the Cheonggyecheon area. However, by 2000, the highway reached its point of obsolescence. Engineers from the Korean Society of Civil Engineering estimated that it would cost $95 million to fix.

Safety risks due to a derelict structure

Engineers from the Korean Society of Civil Engineering found the expressway to lack structural integrity during a study in 2000. Prior to this assessment, only small cars had been allowed to pass since 1997. Carbon monoxide, methane and other gases accumulating at the sewer and drain level below the road were noted to have led to the foundation's corrosion. Repairing the infrastructure would entail a massive budget and a significant overhaul.

The Cheonggyecheon road and expressway carried over 168,000 cars on a daily basis (65,810 moving down the road and 102,747 moving up the elevated road). This volume of traffic posed health concerns for the surrounding communities. Air was severely polluted with unsafe levels of particle matter, nitrogen oxide and benzene. A health survey found that people residing and working around Cheonggyecheon were more than twice as likely to suffer respiratory diseases compared to people in other districts. In addition, noise pollution exceeded standards for commercial areas.

Community in decline, loss of competitiveness

Traffic congestion, combined with safety and health hazards, contributed to an unfavorable living environment. Development around the central business district soon ceased, population and employment decreased, and some company headquarters moved to Gangnam. This spiraled into Cheonggyecheon losing its competitiveness. The elevated highway, though providing access and connecting the city's north and south sides, had also cut through neighborhoods and over time, this segmented communities. Locals likewise deemed the old highway an eyesore.

Technical, construction, and other project concerns

Removing the highway was seen as a radical move, and not many residents embraced the idea at the onset. Locals and some transportation experts thought this could worsen traffic congestion and disorder in the city. Businesses also opposed the project, citing removal of access and consumer foot traffic. Noise and dust from construction activities would also hamper business operations. As such, how to construct soundly and speedily became an added challenge for the city government, as well as how to recycle the waste generated from the demolition. Restoring the stream with constant flowing water was also a concern given that water supply was erratic in Cheonggyecheon, save for rains during summer season.

Remove the expressway and restore the river

The grave safety and health risks supported the rational e for dismantling the old road and elevated highway. In its place, the value of an ecofriendly, livable city was raised. Then Mayor Myung-Bak Lee proposed a paradigm shift in urban management: a Seoul that is for people and not for cars. With the revitalization project, lesser budget was also required and there would be no costly maintenance fees. 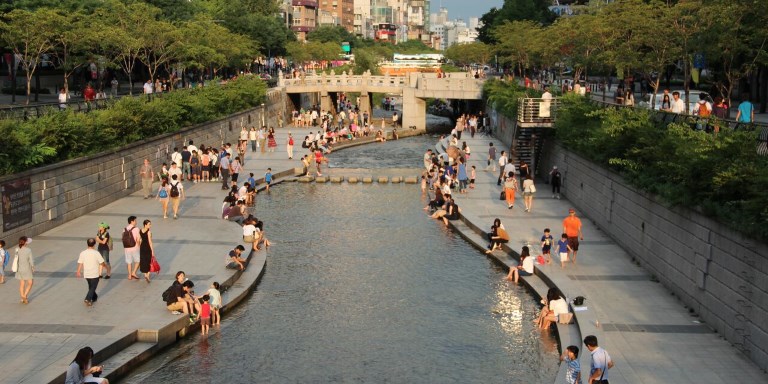 Removing the expressway and the many vehicles that traverse it improved the city's air quality and noise levels. The new waterfront with its teeming biodiversity enhanced this further. The resulting serene stretch additionally contributed to reducing the urban heat island effect in Seoul. Temperatures cooled along the corridor and even wind speeds increased.

More importantly, upgrading public transportation and prioritizing its use over car dependence helped pollution subside. The city government discouraged driving private vehicles in the city center and conducted a comprehensive rationalization of its bus services. They also integrated bus and rail for more seamless travel. In addition, they invested in intelligent transportation systems (ITS) to manage routes and traffic operations and to introduce a smart card system, which will enable the public to conveniently transfer and pay across different transport modes. The outcome was an increase in ridership for both buses and metro. 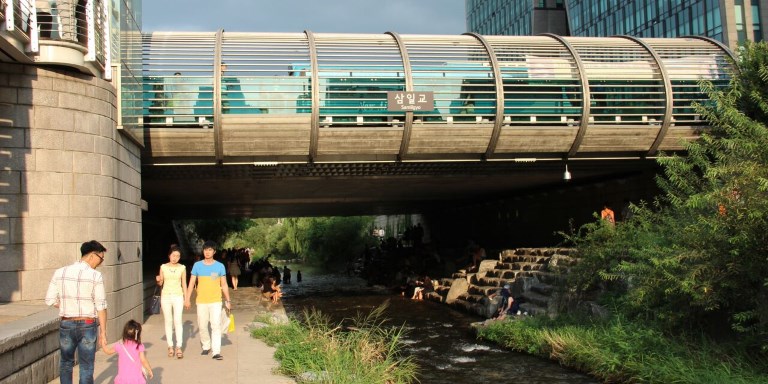 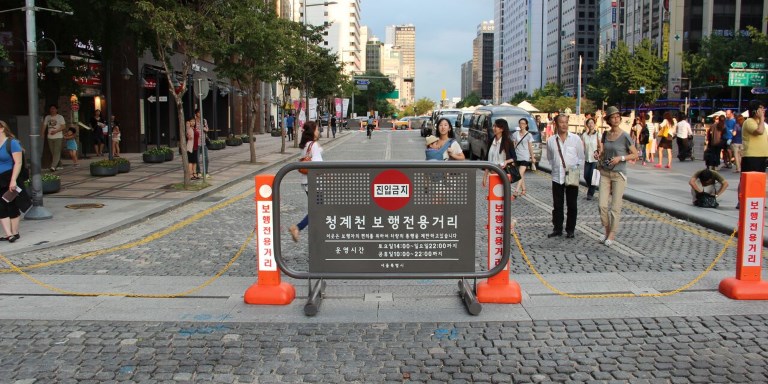 Plan with community in mind

For an effective urban paradigm shift, the city government engaged stakeholders through thorough consultations. They explained the value behind restoring the Cheonggyecheon stream over investing in an expressway, citing how it will address safety problems and mobility demand; reinstate history and culture through preservation of relics and street beautification; and, reenergize businesses. In particular, the government provided financial support and subsidies to business owners, and gave a special arrangement for street vendors. They also implemented parking reforms to stimulate commercial activity.

Along with these benefits for the people, the lands caping of the Cheonggyecheon itself became an attractive element of the city, drawing not only locals but also tourists. The former roadway became a green belt combining three zones: history, urban and culture, and nature. It cemented Cheonggyecheon as a place for hig h-quality living. 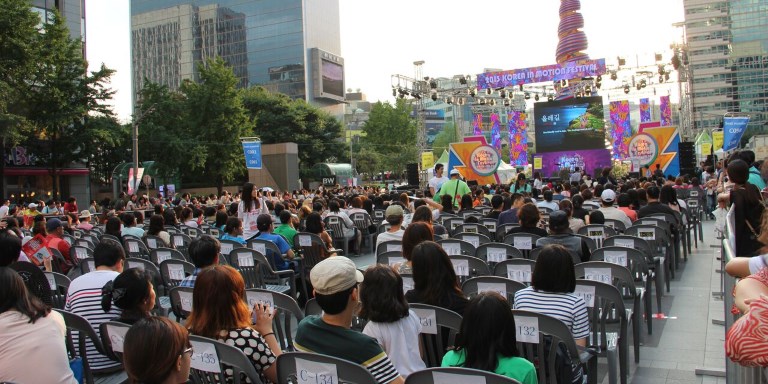 Integrate sustainability into the infrastructure design

Since part of the reason for revitalizing the Cheonggyecheon is to become an environmentally friendly city, the local government ensured that both project outcome and the process behind it were respectful of people and planet. During the demolition, they used diamond wire saws and wheel saws to minimize noise and dust. They generated 872,40 0 tons of waste (concrete and asphalt) and 96% of this was re used, while all of the scrap iron was recycled. For constant water supply, they fed in and treated water from the Han River and underground water from subway stations. They also future-proofed the waterfront by constructing embankments that can endure the worst kind of flood (noted to occur every 200 years). 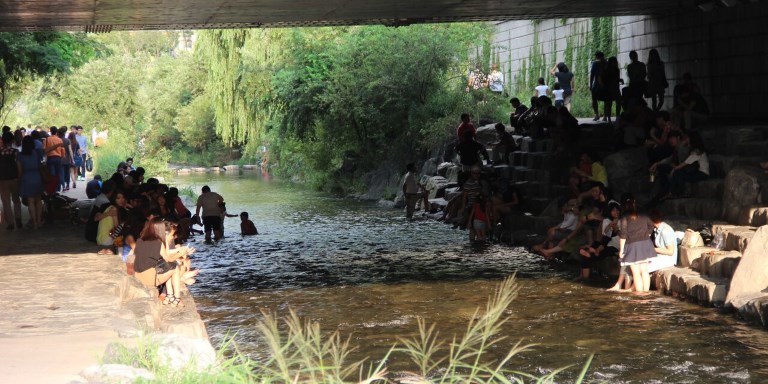 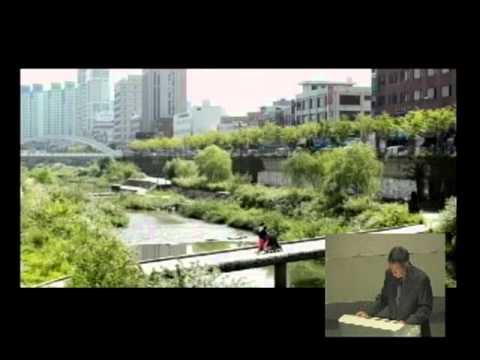 Political will is critical

A progressive project, one that radically changes the norm, is primarily a matter of political will. The idea of destroying a major artery of the city in favor of an extensive park and cultural playground faced criticism. The ability to focus on the goal and get the public onboard takes patience and massive cooperation among stakeholders.

The revitalization of Cheonggyecheon is largely contingent on providing people with alternative transport. The city government reorganized its bus system, classifying routes into a color-coded scheme and adding rapid bus lines. They also enhanced the subway and introduced a smart card system, together with promoting walkability along the river corridor.

Cities worldwide look up to Seoul for the way it promoted this turnaround. From languishing in pollution and congestion, they redeveloped their city using nature. Unearthing the Cheonggyecheon stream and making it a place where people can congregate for leisure or bask in monuments of yore has enhanced quality of life. 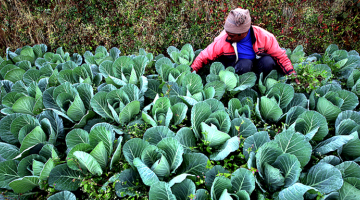 Fighting Obesity in Asia and the Pacific 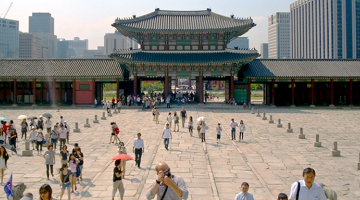 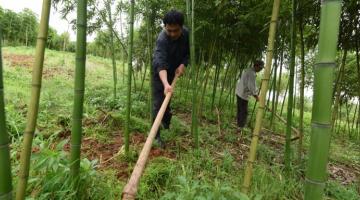