Children participate in a traffic safety campaign held in Gunsan City in the Republic of Korea. Photo credit: The Korea Transport Institute.
Share on:

The Republic of Korea improved road safety for children through strict implementation of policies related to engineering, education, and enforcement.

Road safety for children is one of the most important issues in traffic safety. Efforts to reduce the number of child deaths from road traffic accidents include research on effective policy measures that can drastically lower road collisions involving children.

In the Republic of Korea, 34 children died from traffic accidents in 2018, compared with 1,766 in 1988. The number of fatalities began to drop in 1989 following the enactment and implementation of road traffic safety measures for children. These policies involve engineering, education, and enforcement. Only a few other countries have been successful in improving traffic safety in such a short period of time, and many can learn from the experience of the Republic of Korea in preventing road traffic accidents involving children.

This article is based on the revision of the report Korea's 95% Reduction in Child Traffic Fatalities: Policies and Achievements published by The Korea Transport Institute.

Statistics found that 64.7% of children killed in road crashes were pedestrians. The rest were riding a car (20.6%) or bicycle (11.8%) when the accident occurred. These findings demonstrate the need to intensify road safety education for children, particularly with regard to traveling on foot.

The country’s economic growth since the 1980s saw an increase in the number of private automobiles as a convenient means of transport. Sales of the first domestically produced cars in the late 1970s led to steady growth in the number of registered automobiles, increasing by an annual average of 32% since 1987 and exceeding 10 million in 1997.

With the expansion in car ownership, road traffic accidents and casualties rose as well. However, they began to decrease in the 1990s as the nation suffered from a financial crisis and a global recession occurred. The government also played a crucial role by intensifying its efforts to reduce the number of road collisions and casualties from 1995.

Figure 1: Relationship between the Number of Cars and Traffic Deaths 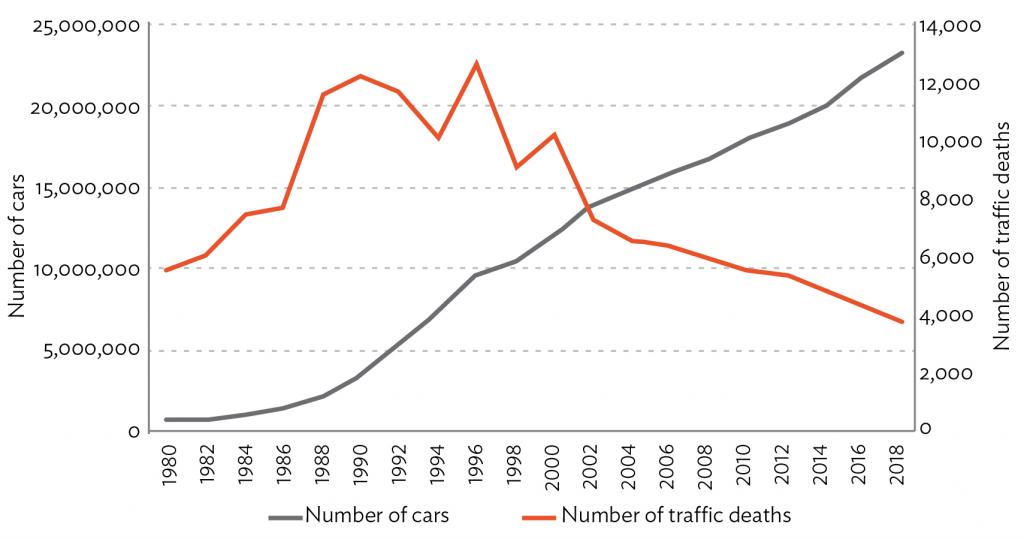 Various measures aimed at reducing road accidents involving children were implemented beginning in 1995. These include major policies on engineering, education, and enforcement, as well as the introduction of relevant laws and institutions.

The Republic of Korea has consistently made investments in projects to improve school zones, conduct safety education, hold publicity activities, and create traffic safety parks. The government introduced the school zone program in 1995. It led to the designation of school zones around kindergartens and elementary schools, and the reinforcement of road safety facilities. A year later, the Ministry of Education required annual road safety education for kindergartens and elementary schools.

In terms of enforcement, the government introduced the school bus protection system in 1997. Beginning in 2011, it implemented a new penalty system under which drivers violating traffic rules in school zones are punished with double fines and double penalty points. 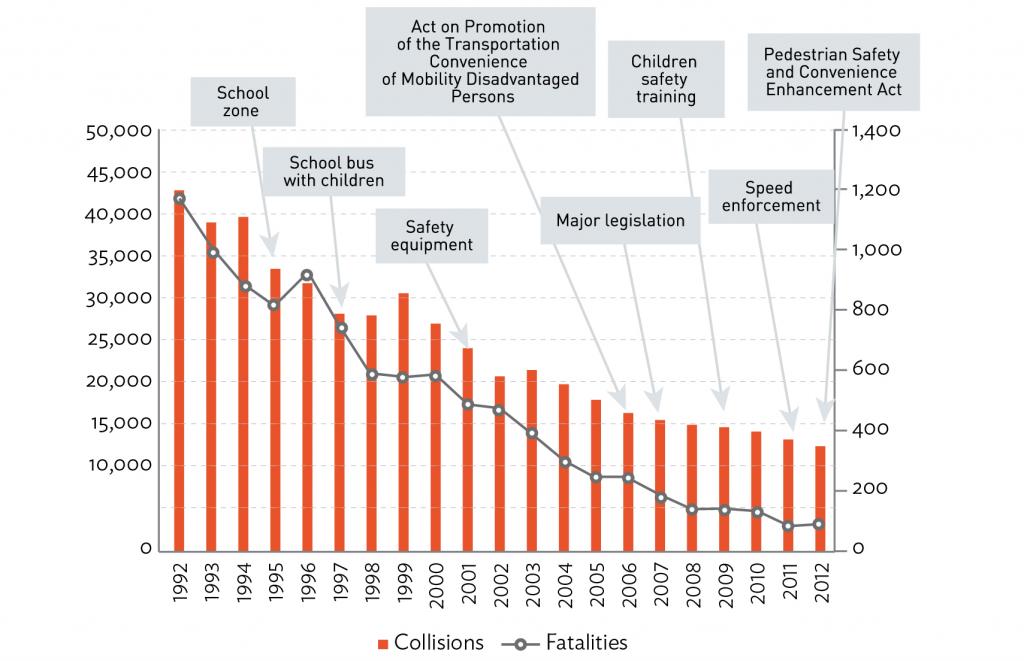 In 1997, a law was enacted to promote pedestrian safety and it included children’s pedestrian and mobility rights. Previously, pedestrian mobility had been perceived as just a desire for movement rather than as a human right. Since 2019, the driver who accidentally kills a child in a school zone will be sentenced to a minimum of 3 years imprisonment.

Other measures implemented include the mandatory road safety education for school bus drivers and a vehicle registration scheme for school buses.

Around 2000, a shift began to occur from the car-centric road system to a pedestrian-oriented road network scheme, contributing to a steady reduction of road accidents and related deaths and injuries.

By 2018, fatal road accidents involving children were cut by more than 98% over roughly 30 years.

The total number of traffic accidents decreased from about 290,481 in 2000 to 217,148 in 2018. Traffic deaths also showed a declining trend. For road accidents involving children, the number of occurrences and the number of deaths rapidly decreased. Between 2000 and 2018, the child population shrank by an estimated 32.6% to 6.68 million, while the number of child road deaths dropped by 94.2% to 34 deaths.

Figure 3: Number of Children Killed in Traffic Accidents in the Republic of Korea

The role of the central government

The role of local governments and communities

Road traffic safety is affected by numerous factors, including road traffic conditions of local communities, and the community members’ awareness of traffic order and safety. Thus, there is a need for local governments and communities to assume greater responsibility and play larger roles in promoting road safety.

The role of civic organizations

There are three types of civic groups related to road safety: 1) those established due to the need felt by public sector organizations, such as the police or schools; 2) those formed by people who have suffered the pain of losing their children in safety accidents; and 3) those created based on the social necessity of addressing the problem of road accidents involving children. One of the civic organizations for the safety of children is the Green Mothers Association that is composed of about 530,000 members in elementary schools. These civic groups make policy suggestions related to transportation, raise child road safety issues, and participate in volunteer service programs for the prevention of traffic accidents.

Many governments face limitations in terms of budget and manpower in terms of efforts to reduce road traffic accidents. It is essential to formulate policies that make effective use of available budget and manpower. As such, it is necessary to promote international information exchanges in various areas such as the enactment of laws related to road safety for children, the formulation and execution of relevant policies, and the effective use of the government budget.